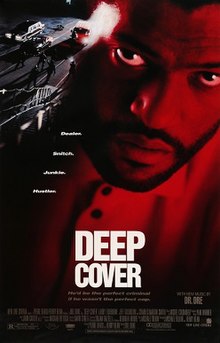 First of all, I know that Deep Cover is credited to Dr. Dre, and it was his first solo single after breaking from Eazy-E’s post-Ice Cube NWA.  But the reality is, nobody listened to Deep Cover for Dre’s lyrics.  Nobody listens to anything for Dr. Dre’s lyrics.  He’s a brilliant producer and a mediocre rapper.

No, the reason to listen to this song is Snoop.

Today is Snoop Dogg’s birthday, and this is the song that introduced him to the world.

Deep Cover was the theme to a gritty B-picture about the life of undercover cops going after street criminals.  The movie was hardcore.  The song, even more so.  It’s the one where we first heard Snoop singing “187 on a muthaf__n cop” (or “undercover cop” on radio-friendly versions).  Dre and Snoop made the song for Dre’s classic album The Chronic, but had to bump it when Ice-T’s Cop Killer song got him unwanted attention from the FBI and Vice President Dan Quayle—so the song predated The Chronic by a few months, and kind of served to whet the appetite.  Snoop’s delivery was powerful and unique, and everyone wanted more from him.

The film ended up being a little too much for most audiences, and it faded away quickly—while the song chugged along at the bottom of the Billboard charts, never rising above #166.