Angie exemplifies where The Rolling Stones were in 1973.  They were considered to be at the peak of their powers, but also relationships between Jagger and Richards were beginning to fray, and the band was wondering—after creating several back-to-back masterpieces—“where will it lead it us from here?”  A lot of people will say Soup is a bad album—particularly given the slew of genius that preceded it—but I actually like it a lot.  It’s just very different.

Angie was pretty much written by Keith, even though Mick sings it.  I have to say: I’d love to hear Keith sing this.  I think his ragged, about-to-die vocals would be perfect on it.

A ballad almost entirey in falsetto, Fool to Cry is pretty much the only memorable song off the Stones’ first album with Ronnie Wood (and several others) on lead guitar.  Mick Taylor quit after the last record (“It’s Only Rock and Roll”), and critics were starting to say that all the best Stones songs were in the rearview mirror.  This was in 1976, and forty years later the band is still producing plantinum-selling albums and having hugely successful world tours full of set lists of songs written after 1976.  Hm.

Ronnie doesn’t play on Fool to Cry, though.  Instead, it’s Wayne Perkins—one of many guitarists auditioning for the role.

Covers: Taylor Dayne would be enough, but then there’s Tegan and Sara! 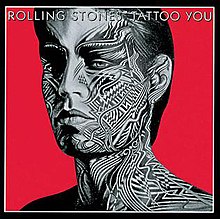 Tattoo You won the Rolling Stones their first Grammy.  That’s right, almost 30 years into their career as the second-most influential rock band of all time, they finally got recognized.  For the album cover.  Hm.

Hang Fire, off that album, was a real break from more recent Stones hits like Miss You and Emotional Rescue.  It eschewed falsetto, and sounded nothing like disco.  In fact, it felt like an early 1970s Stones song but with glitzier production and a little less blues emphasis.  Like the best songs on Tattoo You, the song was an outtake from Some Girls.

Covers: Couldn’t find a single one, so here’s the official video:

The Stones were on a roll in the late 1970s/early 1980s, with every album reaching #1 on the charts…Until this one.  Undercover of the Night, the title track, was one of the bands’ rare political songs, cynical and violent, starting with a percussion riff that sounded like a machine gun, and proceeding to tell horror stories about the effects of war on poorer countries.  It immediately recalled songs like Sympathy for the Devil and Street Fighting Man only…It wasn’t quite as original.  Still, the hook was tremendous.

The video was pretty violent as well, with a male hostage getting shot in the head by the bad guys (led by Keith Richards), and Mick Jagger trying to find and capture them.  MTV refused to show it (at least at first), so I had to stay up late and watch Friday Night Videos.  Anyone else remember that show?

The song is also notable for showing the strong tension between Jagger and Richards—and not just in the video.  The song has some strong R&B and heavy blues flavors (Richards’ contributions), complete with a “doo doo doo doo” harmony recalling the Stones’ old song “Heartbreaker,” but there’s also a fake fade-out at the end and very heavy production reflecting Jagger’s desire to be modern.  The album had only one other hit, “She Was Hot,” which wasn’t a bad song but it did feel pretty derivative.

The band wouldn’t be able to maintain like this.  They would lie low for three years before their next album, Dirty Work, which would be even weaker than this one.

Covers:  Believe it or not, there are a few.


Next: Their most sexist tune of all, and more!

The Aftermath album had some really good songs: Out of Time, Mother’s Little Helper, Paint it Black (U.S. release only), and this one.  It’s otherwise forgettable, except for “Stupid Girl,” another sexist and gender-abusive cut.  It’s remarkable that in the late 1960s, a time of unprecendented liberalism where women’s rights were in the forefront, a rock-and-roll band would come out with what was basically a conservative mega-hit, resistant to all the social change around them.  This was also the song the band was playing when Meredith Hunter was killed by the Hells Angels at Altamount.

24.  Have You Seen Your Mother, Baby, Standing in the Shadow? (Single, 1966)
This might have been the first time The Rolling Stones appeared in drag—on the dust-jacket for the 45 of this song.  It was also the first Stones song to include horns.  It was one of their more complex early singles, with a very heavy blues arrangement.

There is no reason Tattoo You should have been a good record.  None of it was new—the whole thing was outtakes from several years of recording sessions.  And some were from the Black and Blue album, probably the worst of all the 1970s Stones albums. And yet, Tattoo You had many good songs on it, including this one, which became one of the band’s biggest hits.  Originally recorded for Some Girls, it’s straight-up rock and roll raunch, complete with the famous lyric: “You make a dead man come.”
Covers:

Not the first and not the last example of a Jagger/Richards song that’s more cover than original, but whose actual creators never got paid—the chorus leans heavily on “This May Be The Last Time” by the Staple Singers.

But turnabout is fair play: In 1967, The Who started to become known as the “third British band.”  Instead of people asking whether you prefer The Beatles or The Stones, we got this new option—and one of their earliest singles was an A/B side of this tune and “Under My Thumb.”  And The Who had a hit with it!

And then, coming full circle, The Verve sampled a cover of The Last Time, performed by the Andrew Oldham Orchestra, in The Verve’s biggest hit, Bittersweet Symphony, and Allen Klein—who owned the publishing rights to The Stones’ song but who had nothing to do with creating it—sued.  And the result: Jagger and Richards got shared writing credit for Bittersweet Symphony.  Wow.

Covers: One is in Serbian!

Because no tribute to The Rolling Stones  would be complete without this one.