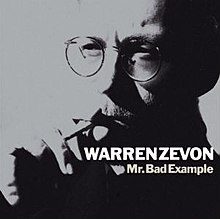 Welcome to Day THREE of my Zevon tribute, where we talk about each of the singer/songwriter’s albums in chronological order and pick out the ones that are The Greatest Of All Tunes. Today, we look at the three records he made in the 1990s.  Yes, just three (and one live record).  It’s surprising that an artist would be produce so little in ten years, especially by today’s standards when if you don’t release a record a year everyone forgets you, but the three that did come out were all gems.

First, we had Mr. Bad Example (1991), Warren Zevon’s first truly great album in over a decade.  The hits were solid: The title track (written with Jorge Calderon) and the understated closing track, “Things to Do inDenver When You’re Dead.” But deeper cuts, like “Searching for a Heart,” showed the kind of introspective depth that matched the promise of Zevon’s work in the 1970s.

Then came a powerful live acoustic album, Learning to Flinch, which had a tremendous new song (“The Last Indifference of Heaven”) and reworked versions of all his biggest songs.  It served as a reintroduction of the artist to a new, MTV Unplugged audience, and showcased how powerful he was as a live performer.

And then came a personal favorite for me: Mutineer.  It was an odd collection of odd songs about Indians, clowns, dogfighters, and the Messiah.  I’d put a bunch of these up as GOATs.  First, “Something Bad Happened to a Clown,” at once frightening and funny.  Next, “The Indifference of Heaven,” which debuted as an acoustic song a year earlier.  And then “Rottweiler Blues,” with it’s chorus:“Don’t knock on my door if you don’t know my rottweiler’s name…”  (The dog is never named in the song.)

Which brings us to the album that closed out the decade, Life’ll Kill Ya.  Critics seem to differ on whether Zevon at this point knew he was dying of cancer, but the title of the album and the songs on it seem to suggest that he did.  It’s a tremendous record, cover to cover good songs and many great ones.  My G.O.A.T. for today will be pulled from this record, but I had to pick just one which means songs like the title track, his cover of Steve Windwood’s “Back in the High Life,” and Dirty Little Religion have to be left in the dust.

The sweet and powerful “Don’t Let Us Get Sick.” Why? Because, as a person with a chronic illness, it breaks me open every time I hear it.

Cover versions of Don’t Let Us Get Sick: Jill Sobule’s is beautiful.