Last time, I let you know what was new with DC projects post San Diego.  Now: Everyone other than DC or Marvel.

JMS LAUNCHES HIS OWN COMIC COMPANY.  Joining the likes of so many star creators, the famous J. Michael Straczynski is getting his own imprint with Image Comics to create comic books that he intends to crossplatform into TV, movies, etc.  JMS, of course, is the man who wrote the Thor comics that formed the basis for the movie character and also wrote the bestselling Earth One Superman graphic novel last year for DC.  He’s one of the most name-brand recognizable creators in the comic book world, but he joins creators like Paolo Rivera, Ed Brubaker, Chris Roberson, and many others in a mass exodus from Marvel/DC.  At the same time, Marvel/DC don’t appear to be cultivating talent the way that they used to—much as corporate parents are no longer in the business of cultivating young musicians or allowing TV shows to grow a fanbase gradually.  Corporations seem to want instant megahits, or they drop you like a rock.  It makes me wonder whether we’ll ever see another renaissance of comic book talent like the one Joe Quesada was largely responsible for in the late 1990s/early 2000s when he brought guys like Garth Ennis, Warren Ellis, and others to Marvel and allowed these creators to grow gradually and hone their crafts.

GERARD WAY RETURNS.  Gerard returns to comics, with Becky Cloonan, on a book titled, “The True Lives of the Fabulous Killjoys.”  Which sounds like

it could be the title of a My Chemical Romance album.

JUDGE DREDD NEWS.  Apparently, the comicon screening went very well and it is, indeed, incredibly (appropriately) violent.  In other Dredd news, IDW announced that their comic book reboot of the character will get a new creative team: Duane Swierczynski and Nelson Daniel.  It sounds like it will be Judge Dredd Year One.  I blow hot-and-cold with Swierczynski, and I can’t say that I’m a big fan of any Dredd book without Brian Bolland, but I’m open minded about it….And the fact that there will be a back-up story by Jim Starlin greatly increases the likelihood that I’ll part with my money for this book.  It arrives in November.

LANCE HENRIKSEN: AUTHOR.  Actor Lance Henriksen will be writing a horror comic for Dark Horse called, “To Hell You Ride.”  I guess he’s as tired as I am of his attempts to make us believe that there will be a Millennium movie.

TOP COW ON THE BIG SCREEN.  The publisher has many books that have gotten film deals announced at SDCC.  The caveats, of course, are that a “deal” doesn’t always lead to a movie (and usually doesn’t, in fact, see: Deadpool), and that nobody has heard of most of these Top Cow books.  Except maybe Bushido: The Way of the Warrior.  Or maybe The Darkness.  Any of you read that?

JOSS WHEDON IS WORKING ON A PROJECT WITH WARREN ELLIS.  It can’t get much better than that….

STRANGERS IN PARADISE: THE NOVEL.  Terry Moore’s wonderful, beautiful and heart rending comic will return…As a book.  I’m not sure I’m as interested in the gang if his art isn’t a part of it.  But he’s saying that his age is catching up to him—he’s 60—and he wants to let go of the art chores.  At the 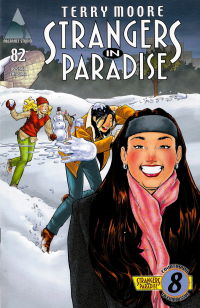 same time, he promised that Rachel Rising—best book of 2012—will continue for about 40 issues.   Moore also hinted at a Rachel Rising movie and promised Strangers-related stuff to celebrate the 20th Anniversary of issue #1, in 2013.

BUT BOOM! STUDIOS WILL NOT BE OUTDONE.  They announced a few cool items, including:

LOVE AND ROCKETS: DIGITAL EDITIONS.  One of the most-loved adult-oriented comic books will be appearing on ComiXology, starting with the most recent series (“New Stories”).  I like the Hernandez series’ art, but I’ve never been able to get into anthologized comic books.  They’re too fragmented for me.

ANOTHER IMPORTANT PART OF MY CHILDHOOD DISAPPEARS…West 13thand Broadway, just a block from Union Square Park, was the place to which I would sojourn every few months with a wad of money or some back-issues to sell to The Forbidden Planet: Two floors of comic books, Shogun Warriors, SF novels, and all kinds of cool toys and tie-ins…I loved that place.  I’d spend hours there.  And now they’re moving.  Yes, it’s to a larger location, and it’s only a block down the street, but that little corner at 840 Broadway will always have meaning for me.  On the other hand, it’s great to hear about a comic shop expanding rather than shutting its doors forever.

LAST BUT NOT LEAST: MY LITTLE PONY.  MLP is getting a comic from IDW.  I guess it makes sense, what with 4,000 people attending the Bronycon.