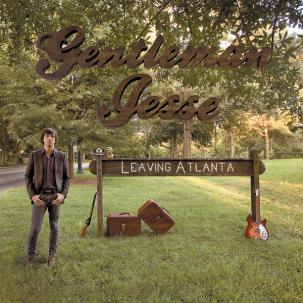 Whenever someone sends me a record or I hear about one from some blog I like, the first thing I do is go here to see if the record label is in the RIAA. If they are, they don’t meet my personal criteria for getting bloglove from me.  It’s nothing against guys in the RIAA, or even against people wanting to protect their copyrights.  It’s more that the RIAA has proven itself to be so litigious in such negative ways towards all the wrong people.  But I don’t want to get into that right now.  My only reason for mentioning that in this post is because Gentleman Jesse’s record label is called “Douchmaster.”  I don’t know if like that name or hate it.  But it’s attention grabbing.

And so is “Leaving Atlanta,” an album that runs in the spaces between garage rock, retro rock, classic rock, and punk–the same ground well-trodden by Elvis Costello in his first few records.  It’s a good space to be in, particularly because nobody’s really doing it anymore.  Jesse’s album may at times make you think of The Byrds or old Springsteen, but just as often it will make you think of an old relationship or a decision that you need to make, but have been avoiding.  It’s deeply personal, with wonderful lyrics, terrific hooks, and catchy refrains.

Check out the stream from soundcloud below, and the video, and tell me this isn’t one of the best rock albums you’ve heard this year.
[soundcloud url=”http://api.soundcloud.com/tracks/37872366″ iframe=”true” /]