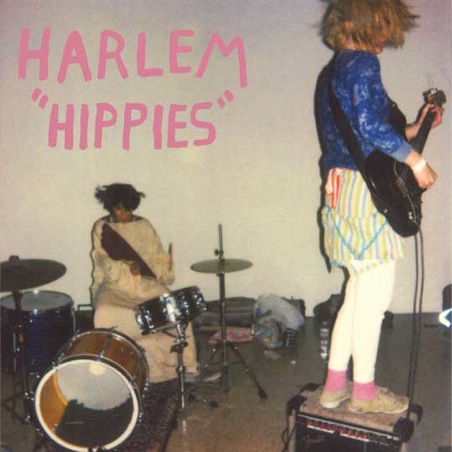 “Someday soon you’ll be on fire/Ask me for a glass of water/I’ll say noooooo/Let that shit burn/And you’ll say/Please please please put me out/I promise not to do again/Whatever I did to you . . .”  This is the opening line on the opening song (“Someday Soon”) of Harlem‘s Matador debut, “Hippies.”  Does the title raise expectations of love and flowers, jangly peace songs about coming together?  Well, these opening lines should force you to jettison any such prediction.

The music is garage rock.  Think Nobunny, Iggy Pop, The Strokes, White Stripes . . . Power chords, all hooks, grimey production . . . Party grunge.  The lyrics are silly and ironic, but witty–not corny.  It would be easy for a band like to this get old quick, and the only problem with the album is that the songs do start to sound the same after a while.  The duo, from Austin by way of Tucson, could stand to expand a little bit more into blues or balladry.  “Cloud Pleaser” starts to go that way, but the thumping of guitar-vs.-drum takes away from any sensitivity the song might otherwise have had.  Harlem are clearly not deep thinkers.  (One of the best songs on the album is a jam-with-screams called “Stripper Sunset.”)  But what they do well sounds like punk versions of 1960s girl groups songs.  In all, Hippies is a lot of fun–and I can’t imagine that this band wouldn’t be good live.  (I’ve heard they set things on fire.)  And when they hit well, it’s like a soda bottle exploding up your nose.  “Faces” bursts out of the starting gate at a breakneck pace and never lets up.  The afore-mentioned “Someday Soon” cooks and boils.  “Scare You” runs like a subway car blowing through a station without stopping, knocking the listener with a blast of warm, stanky air.

Yeah, this sounds like stuff you’ve heard before.  But you probably aren’t used to hearing it done this well.

BONUS COVER BY ANOTHER BAND WITH HARLEM IN THEIR NAME