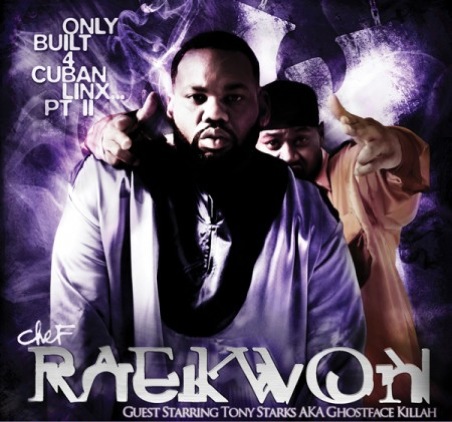 Only Built 4 Cuban Lynx (a.k.a. “Linx”) is easily one of the most important, and best, single-artist original mixtapes of all time.  It’s right up there with Lil’ Wayne’s, “Dedication,” Clipse’s, “We Got It 4 Cheap,” and the first couple mixtapes by Young Jeezy.  These works defined the mixtape as a street album, a place where artists could establish themselves or, in the case of Raekwon, redefine themselves.  On Only Built 4 Cuban Lynx, The Chef and his partner, Ghostface Killah, established their ability to work without the Wu Tang Clan (even if most of the key Clanners participated).  So, what is Rae trying to by releasing a sequel, over ten years later?

He’s trying to save rap.

Raekwon (and Ghostface) pretty much created mafia rap, a genre that tells raw street stories.  Unlike gangsta rap, Mafioso hip hop focuses on the good and the bad, without glamorizing bling and drug dealing.  It’s “conscious,” in the sense that it is aware, but does not qualify as “conscious rap” because it makes no apologies and doesn’t seek to convert bangers away from the life.  The reach and influence of this style, which grew out of Slick Rick’s storytelling, is huge.  In many ways, Ice Cube’s old, first-person NWA stories were a response to Raekwon and Ghostface.  Where Rae and Ghost can be crude and violent, they were never self-indulgent.  Of course, from NWA came gangsta rap and from that came just about everything else.

So how does Raekwon’s return fare in this modern era?  Amazingly well.  It’s a true-to-the-game, blistering joyride that never stops moving.  It’s like he released it days, instead of years, after Cuban Lynx I.

Of course, as far as age and credibility go, Raekwon has the advantage of never having been a blockbuster, never having sold himself based on his abs or his cameo appearances, and, frankly, never having appeared to have sold out.  Sure, he’s made buckets of change off of Wu Tang alone, and the first Only Built mixtape eventually got a proper album release, but he’s always remained (or at least appears to have always remained) humble.  On Linx II, he’s up to his old tricks, telling tales comparably grimey and raw—and in some cases, like “Gihad,” even more intense than ever.  The guest shots are ubiquitous and pretty much excellent without exception, with contributions on the mic or the boards from, among others, the surviving members of Wu-Tang Clan, Dr. Dre, Beanie Sigel, Slick Rick, Busta Rhymes, Marley Marl, Erick Sermon, Cappadonna, J Dilla, Jadakiss, and, of course, Ghostface.  The only obvious person missing is Nas, who doesn’t appear
(for personal reasons) on “Verbal Intercourse 2.”

Pretty Toney fills the same role he had on Linx I, peppering Raekwon’s heavy/serious tales with bizarre and violent poetry.  He’s like a very intelligent and versatile hype man who is capable of holding his own.  GFK deserves to share title billing on this album; that he didn’t fight for it is a testament to his obvious love for Raekwon and for Hip Hop as an art form.

Lyrically, Rae and Ghost (and friends) are still full of choruses that chant about money and guns, and they still throw in head-scratchers (“Our guns is chunky,” e.g.) and tell vile stories with humor and aplomb.  One minor quibble: The beats here are no longer primarily Cuban.  “Surgical Gloves” sounds middle Eastern, and there are Asian influences on several other tracks.  But don’t take this as a complaint.  The music is fantastic.  It’s just that calling it “Cuban” Linx is a little misleading.

Misleading title aside OB4CL2 is easily one of the best records of the year..  The second half of this decade may be remembered as the year that many old-timers returned with new claims of relevance: KRS-One and Buckshot teamed up and released a strong album, even if it didn’t break new ground for either of them.  Jay-Z tried (some would say tried too hard) to return to form.  Nas said hip hop was dead, but then kept putting albums out.  Clipse have struggled to release Until The Casket Drops and, more famously, Dr. Dre still hasn’t brought Dretox.  Oh, and Wu Tang released easily the worst album of their career, and in the process showed their ugly sides.  Several Clanners have shown a steady decline in the quality of their solo work as well.  Even Tupac has run out of decent material.

Only Raekwon’s return is a certifiable classic.  It should remind everyone why the 1990s were the best years for rap, and why The Chef and Iron Man deserve to be remembered as the greatest rap duo of all time.