Compilations are generally spotty affairs: Some reissued tunes, a couple originals by bands who can’t hold their own for a full record, and one or two hot tunes designed to sell the package.  I can’t say this about “Guilt By Association Vol. 2”, from Engine Room Recordings. 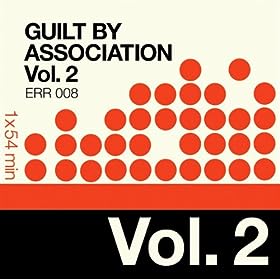 Volume one had some big names, but it was a little spotty in terms of quality.  Highlights included Petra Haden’s take on Journey and Goat’s remarkable transformation of Sugar, We’re Going Down (Fall Out Boy) into an indie rock classic.  Volume Two, however, is practically flawless.  There’s My Brightest Diamond, whose voice sounds more like Gloria Jones than Soft Cell, doing “Tainted Love,” the lead track and probably the most powerful one on the album.  (MBD is becoming one of my favorite cover artists these days.)  There’s Takka Takka bizarre, slow version of “In the Air Tonight,” which has not one scintilla of the pop in the Phil Collins original.  My only criticism is that some of the songs are hardly guilty pleasures.  INXS?  OMD?  Kanye West?  These are talented artists with range and skill, who have lasted a lot longer than a single song, and the songs themselves, particularly Kanye’s “Can’t Tell Me Nothing” are hardly shameful.  But don’t let this stop you from buying the album.  It’s great.

Which brings me to Robbers on High Street’s submission to the project: “Cool It Now.”  The original, a New Edition tune, has the honor of being the only New Edition/BoysIIMen/Bobby Brown hit that is less corny than “Popcorn Love.”  A guilty pleasure so good, you have to taste it twice.  The second version is by Len, who are themselves responsible for the guilty pleasure, “Steal My Sunshine.”  I must have worn through the grooves on this brightly colored 45 when it came out.  I remember knowing that the rap break was corny, but memorizing it anyway.  Even at the age of 14, I knew to hide my head when I listened to this . . .