Joell Ortiz is probably best known as (the most talented) member of the underground-superstar rap group Slaughterhouse, and that’s not a good thing. Ortiz is an amazing rapper on his own, and although he certainly has made a good living at it, he’s never blown up the way he should have.

He reps Brooklyn hard and most of his material leans heavily on his own experiences both before and after he became a rapper so, like his Slaughterhouse colleague (and sometimes enemy) Joe Budden, he speaks a lot about the industry. And because he lost his major label deal after his first album, nearly all his work is either mixtapes or indie albums. I’m rating his solo work today-not his stuff with Slaughterhouse. Of that band’s work, I’d recommend their first two albums. Solid stuff from four rappers who have not found kindness in the industry but all of whom have made solid livings in the world of hip hop and deserve much more recognition.

His debut mixtape. It shows a lot of potential, but nothing here stands out long-term. At the time, though, it was a great introduction to an up-and-comer, and got him a major label deal.

Another early mixtape, produced by Frequency, showcasing Joell’s abilities, but the emphasis is on bars not overall songcraft. Nothing bad here but nothing that stands out. This came out after his record deal got killed. 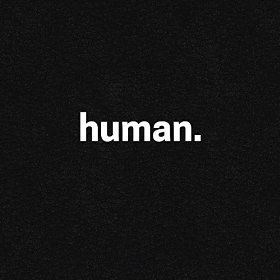 Two full-length mixtapes. Between them both, you’ve got an album of strong material-but lots here that could be skipped.

Joell’s fourth official studio album. It was made with Illmind behind the boards (who Joell worked with on one song for his last album) and released on his own label, Human has few features and focuses mostly on Ortiz’s lyrical skills. It sold well, hitting #17 on the top rap albums and #21 on the independent albums chart. For me, though, the content felt light and none of the songs have stayed in my active playlists.

Another digital only, DIY release, but this one does defy what, up to now, we’d seen from Ortiz. There is a heavy emphasis on smooth, soul beats and slicker delivery. And I mean that in the best way. To now, Ortiz was a gritty street rapper, and with Defying the Predictable, he shows us another side. Of course not every song lands like we’d hope, but it’s always cool to see an artist change up their style and those songs that do land right are really good and memorable.

Best cuts: Here the Next; We Ain’t Trippin’.

Self-released, I really enjoyed this one. It’s only a few songs, otherwise I’d rate it higher.

A mixtape of songs that weren’t good enough to make it on The Brick. It’s hit-or-miss, but overall some very good stuff here. Like another chapter in the “125” saga that appeared on The Brick, his Ill Street Blues freestyle, and Lil Fun with Novel, a frequent collaborator with Joell.

Extremely strong lyricism here. Sadly, it’s more of an EP than a full album (clocking in at under a half hour) and it’s full of features that, as you might expect, don’t always deliver the goods. But some do. Kool G Raps lines on Reppin NY are great. Token offers some kick-ass bars. But with guests appearing on nearly every song, That’s Hip Hop doesn’t feel cohesive. Of course, hip hop is often disjointed-so maybe That’s Hip Hop is intentionally scattered?

The producers behind New York’s Diplomats crew back Ortiz and Fred the Godson, two East Coast rappers renowned for their lyricism. I like this album more and more over time.

After a slew of EPs, Joell Ortiz releases his eight proper album. He continues his relationships with Heatmakerz and Apollo Brown, and also continues to move toward more mature content-a shift that really started with his “Monday” album.

Best cuts: In My Feelings; 1 Day; Sincerely Yours. Also, CyHi the Prynce has the best feature on “Holy Ghost.”

Four years and several independent releases after his major label debut, Joell Ortiz got released from his contract with E1 Music but was still unable to sign with Eminem, who was then courting him. This album concluded his deal with E1 and got released under that label, which may not have been a bad thing for Ortiz. He got production from some great DJs, including Just Blaze, Premier, Large Professor, Khalil, and Knobody. The album had one moderate hit (Put Some Money on It” (featuring the LOX)) and some solid features by Fat Joe, Royce da 5’9″ (later a member of Slaughterhouse with Oritz), and others.

And after this record, he would be back to the mixtape grind for another three years before dropping House Slippers.

Best cuts: Besides Put Some Money…, I would go with Sing Like Bilal, Finish What You Start (with Royce), and Oh!

With production by the great Apollo Brown, the Mona Lisa EP arrived with high expectations. And it largely met them. Back-in-the-day rhymes over warm beats, the album has a “classic” feel and is distinctly Brooklynesque. I do wish it had hit a bit harder-but there are some really good songs here and the feel is great. Overall, this is a very strong album.

If you’re just listening to his studio productions, then the difference between this album and the one that preceded it, Free Agent, is stark. Where Joell was once full of fire and fight, he’s now comfortable. Wearing House Slippers. On this song, he assumes that you accept his status as an important modern rapper. He’s happy to tell you about how well he’s doing. He’s not fighting-he’s accepting his place in rap’s pantheon. If that is well-deserved or over-confident, I leave to you to judge. Actually, no I don’t. By this time in his career, Ortiz is known. He’s put out some very good records and at least a couple truly great ones. So yeah, he should be leaning back and happy. The album tells the story of his struggle and how he got to the point where he can afford to relax.

House Slippers came out while he was recording his parts for the Slaughterhouse debut, “Welcome to Our House,” on Shady Records. So although he was independent and released House Slippers on a smaller label, he did have some big company mojo behind him. As a result it debuted in the Billboard top 50, he got some videos made and some features by B.o.B. (who was huge at the time), as well as his Slaughterhouse mates, and production by Heatmakerz.

Favorite songs: Title track, Brothers Keeper, Q & A (a really fun song about the life of a working rap star). 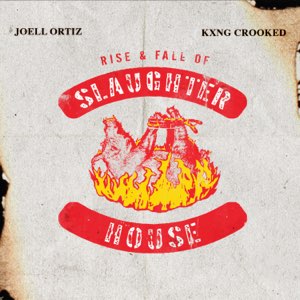 Predictably, the rap supergroup Slaughterhouse collapsed under the weight of its own egos. The half of the crew that still is on speaking terms, Joell and Kxng Crooked, give us the post-mortem in an album that’s all about the formation, hay day, and fall of the band.

Many of the stories told here were also related in interviews, but that made this album no less fascinating for me. I can’t think of any other album (rap or otherwise) in history that told both the origin and death story of a band. And while “coming up” songs are common in rap, ones about coming down are practically nonexistent. Regardless of whose side you wind up on in the various he-said/he-said arguments between members, Ortiz and Crooked tell a great story here that has appeal and applicability beyond the four walls of Slaughterhouse. Fall outs with close friends, money and career being an allure that turns on the winner, and love as the price of success are universal themes.

I love this album.

Best cuts: Honestly, I dig all of them.

I know I said I would only do his solo stuff, and this is Joell with Nitty Scott and Bodega Bamz (with producer Salaam Remi), but this is SO DAMN GOOD.  It’s one long party tape that gives the incredibly skilled and underrated Nitty plenty of time to flex.

Joey’s second release on the Mello Music Group label. The first, Mona Lisa, was produced entirely by Apollo Brown. Brown is only on a few tracks here, alongside big names like J.U.S.T.I.C.E. League and Heatmakerz. The content is typical Joell, about how he used to run the streets and now he is a big name in rap, but the verses are better than usual and the track “Anxiety” (about his own anxiety disorder) is a lot more “deeply personal” than Ortiz’s usual stuff. Learn You, featuring Big KRIT, is a rap for his son, lamenting Ortiz’s own poor parenting. Sure, Joell often raps about events that happen in his life, but he doesn’t tend to reveal internal issues that can be perceived as weakness. Monday is a sign that Joell is softening and aging, and doesn’t have to front as hard as he used to.

This is one of my all-time favorite mixtapes. It’s in the tradition of the subgenre to steal the best beats of the day and show how you can one-up the original verses. Here, Ortiz twists that idea and takes on nearly all of the best beats ever made, often in 1-minute bursts, and offers his own bars over them. Part of the fun is trying to place who he’s biting before the next cut starts, but after you’re done playing that game you can start appreciating how much fire he spits in every line.

Seriously, I’d place this on the level of all the best mixtapes, like Lil’ Wayne’s Dedication series and Clipse’s best entries. 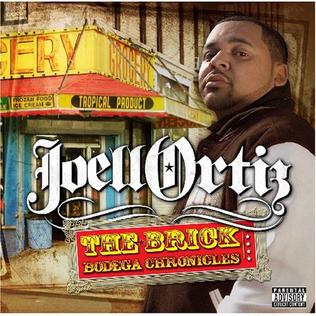 I hate it when someone’s debut studio album is their best, but that’s where we are. Nothing in ranking this #1 on my list should take away from the rest of Ortiz’s work, which has shown a lot of growth and has truly proven that indie hip hop can be as relevant, tough, and well-constructed as anything from a big name producer.

For the Brick, Ortiz got some some big name producers (some before they were big names!) like Alchemist, Showbiz, and Frank Dukes, and some big name feature artists including old school titans like Big Daddy Kane, folks whose stars where rising like Akon, and workhorse stallions like Styles P, Rass Kass, and Immortal Technique.

Favorite cuts: The “125” sequence, which appears in multiple installments across the album; Brooklyn (remix) featuring Cashmere, Maino, Big Daddy Kane and Solomon; Night in My Ps feat. Big Noyd; and Brooklyn Bullshit. But honestly, end-to-end, this is a great album.