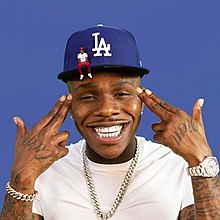 “I’ll beat you up right in front of your partners and children…”  There’s some pretty ruthless, hard-ass shit on Da Baby’s debut album.  But look at his picture on the cover.  He’s funny.  He’s charming, with a smile broader than a billboard.

DaBaby gets my highest recommendation.

There’s something about a guy who’s able to be hard and funny at the same time. A lot of rap is a charm game, and Dababy’s got that part down.