Home
Berkeley Place
THE MARCHES-4AM is the New Midnight 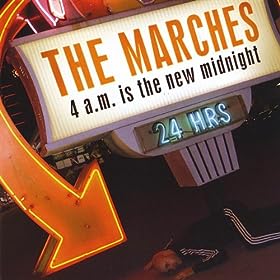 Let’s start with the title track of the new record by Los Angeles’ The Marches. It’s an odd amalgam of electronica and piano, with vocals that are somewhere between a cheerleader chant and a playground taunt, with harmonies by a voice simulator, ending with sweet harmonies over strings. This track should give you a fair idea of what you’re in for if you pick up the band’s new release, “4AM is the New Midnight.” It (intentionally) ignores musical boundaries, melds genres, and, generally, is all over the place. “Bad Touch” is close to Beck channeling the Flaming Lips (or Hot Chip), with a ‘70s soul backbeat. Then there’s “Need Me Back,” which is a blues song, with a nice (if somewhat nondescript) female vocalist backed by Morphine on steroids. “Don’t Love With Your Eyes,” is an upbeat, bouncy jazzy number. “So Ill” begins with a Gnarls Barkley beat, but ends up being a lot like Beck again. And between it all are strange and
sometimes jarring interludes, like “Skinema,” a brief piece that sounds like a tuba dying, and “End of the Album Pt. 2,” which is just the band talking in the studio.

It can be disconcerting to listen to, and definitely isn’t background music, but there’s a playfulness here, a sense of improvisation and fun, that hold the album together. Musically, it’s fascinating. As a record to sit and listen to, it can be interesting. It can also be annoying. But when Conti and his mates settle into serious music, their talent is undeniable. This is the band you want to hear in a club—full of surprises, somewhat chaotic, and able to do anything they want.