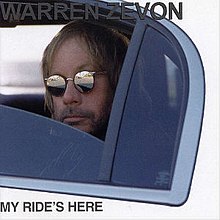 Welcome to the last post in my Zevon tribute, where I look at each of the singer/songwriter’s albums in chronological order and pick out The Greatest Of All Tunes on each one. Today, his last two records, aptly titled: My Ride’s Here and The Wind.
According to Wiki, Zevon was diagnosed with cancer in 2002, and My Ride’s Here came out in 2001, so supposedly it was written before he knew he was dying.  But he himself described the record as “a meditation on death,” and it certainly plays like a death note.  Which is not to say it’s depressing, just that it has a real sense of finality to it.  And it’s probably one Zevon’s least-interesting records (exemplified by one of the song’s titles: Hit Somebody! (The Hockey Song).  Not a single song on here comes close to a G.O.A.T. 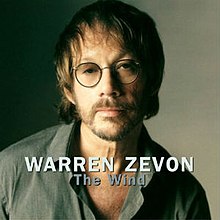 But then you get to The Wind, and you get a masterpiece.  A 2003 jam album released posthumously and recorded during the last few months of his life, just about everyone who ever played with Zevon throughout his 30-year history—and many folks who didn’t—came to the studio and jammed him off this mortal coil.  Ry Cooder, Don Henley, Dwight Yoakam, Springsteen, John Waite, Tommy Shaw, Mick Fleetwood, Jackson Browne, David Lindley,Emmylou Harris, Joe Walsh, T-Bone Burnett, Tom Petty…It’s a country/blues rock who’s who.  Every song is perfect, but the GOAT I’m picking is the beautiful closer, “Keep Me in Your Heart.”

Now, which of these will end up on my top 100 best songs of all time list?  Today’s entry may not be as famous as a lot of his songs, like Lawyers Guns and Money, but it’s his most powerful.  Close behind would be Don’t Let Us Get Sick and The French Inhaler.  So that one, and of course his rock classic “Werewolves,” get on the list.

Come back tomorrow for the bonus round!

Covers of Keep Me In Your Heart, which got two Grammy nominations: