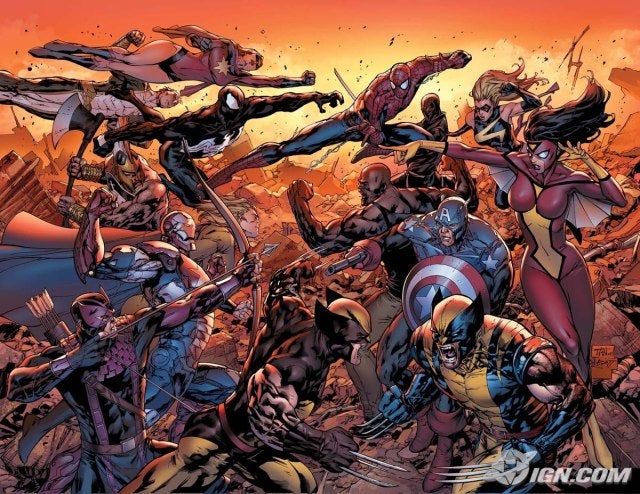 If you go to my comic shop, you’ll find an entire section devoted to Dark Reign books.  Many (most) are a complete waste of time.  Like the recent Green Goblin one, which was basically just a reprint of a couple old Amazing Spider-Man issues that have been reprinted many times before.  Or the Young Avengers one, which takes a book that was once great and further grinds the youthful, optimistic concept under the cynical boot of Joe Queseda.  (The ruination of that innovative and interesting band of youth began with a depressing Civil War tie-in.)  Dark Reign seems like an excuse to create B-versions of A-heroes, and pit them against each other.  Just like Civil War was just an excuse to have heroes fight each other for a prolonged period.  Usually they just fight each other the first time they meet, for a few pages, y’know.  Civil War didn’t suck, but it wasn’t great.  It turned our heroes from good folks we good aspire to be and showed them to be petty, risking the security of their ideals just get government jobs.  Iron Man deserved better.  So, of course, did Captain America.

In addition to this degrading pessimism, the Marvel U is cursed with a zillion books about the same groups of characters.  How many things can Wolverine possibly do in one month?  And with his recent appearance in Ms. Marvel and his mediocre mini-series “Merc With A Mouth,” one begins to wonder the same thing about Deadpool.  Deadpool’s own book is sheer genius, a bright spot in the Marvel Universe precisely because it does what most other Marvel books do not: It tells jokes and doesn’t take itself so damn seriously.

The ubiquity of characters throughout various titles, and the incessant cross-overs and tie-ins, makes it nearly impossible for new readers to jump on and punished people who are on a budget.  I count at least five Avengers books (Ultimate, New, Initiative, Dark, and Mighty), not including the Pet Avengers and the half-dozen spin-offs (such as the Dark Reign books), as well as the solo books of the characters in the various groups.  Enough!  And Marvel seemed to understand, with Amazing Spider-Man: Brand New Day, that some readers just want to be entertained without spending $20 a week or more just to be able to understand what the heck is going on.  But gradually, Dark Reign has been infecting that book as well.  Thankfully, the writing for the most part has stayed self-contained and relatively upbeat, but there are signs for concern.

I used to love D.C.’s relaunch of the Teen Titans, until they started breaking the team up and adding a whole bunch of characters that nobody cares about (Miss Martian?  Kid Devil?) and sacrificed the humor and loving relationships between a group of not-so-side sidekicks for dark and convoluted stories about treachery and Ravager, Terminator’s daughter.  They killed the book for me.  Marvel has much better quality overall than D.C., but the entire Universe is showing signs of wear.  First, they kill Cap and turn Iron Man into a fascist with The Civil War.  Then they (lamely) rip off Battlestar Galactica by placing skrulls throughout their books, increasing our distrust of the stories and characters.  Then Dark Reign comes, and we are supposed to believe that this entire country, which recently elected its first African American president and appointed its first Hispanic Justice, is so blindly fearful and bigoted that we’ll just embrace known evildoers and allow them to establish a police state in every state.  I just don’t buy it.  I was hoping that the rebirth of Captain America would be a step towards lightening up and returning heroes to their proper place, but it’s not looking good.

After all, we read comic books to be inspired, to escape.  If I want to crack open something as depressing as real life, I’ll read the latest People Magazine article about Kate plus 8.  I’m not saying every book should be like Marvel Adventures, but we can’t we have a few more Deadpools and Amazing Spider-Mans (and the wonderful Oz series), and a few less Dark Reigns, Dark X-Men, Dark Dark Dark books?