This year for my best albums list, I’ve tried to pick a variety of genres and styles and where there were similar, almost-as-good albums, put them in a RIYL note instead of also including them on the list and making the list very long.

So, just 20 carefully curated records for this year’s list.  I hope you enjoy, and if I missed anything good, drop me a note!

Great indie rock.. IF YOU LIKE THIS, TRY…Indigo De Souza‘s new one.  It’s just as good as Wolf Alice, and it was hard to pick which one to list and which to put as the “also try.”

18. Collapsed in Sunbeams by Arlo Park

Polo G continues to be one of the most interesting lyricists on the scene, even if his beats and delivery can get a little same-y over time.  But there’s enough really, really good stuff on this record to warrant including it on my list.

IF YOU LIKE THIS, TRY…If you like Polo G’s new school way of telling gangsta tales, check out Giovanni’s Way by Payroll Giovanni.  I could easily have switched these two, making Giovanni the listed record and Polo G the als0-ran.  They’re equally good albums.

16. Sad and Beautiful by Jesse Malin

Malin has been around for decades, and this album is proof he’s been honing his skills.  Excellent songwriting, excellent performance.  Excellent album all around.

IF YOU LIKE THE CLASSIC ROCK SOUND, TRY SOME ROCK BY OLDER FOLKS:  Of everyone on this list, Malin has the most “classic rock” sound.  So, I thought I’d talk a bit about classic rockmakers.  Medicine at Midnight by Foo Fighters.   Dave Grohl and company are also old, by rock-and-roll standards, and yet they continue to carry the torch for real rock and roll.  At a time when the genre is nearly dead, or at least is on life support serving a source of cover songs for modern acts, the Foos keep it going.  If you like the classic indie rock sound, you might like Pressure Machine by the Killers.  It’s like their “Nebraska” (only not as good as Bruce Springsteen’s near-perfect, dark acoustic rock album.  And to close the loop on indie rockers coming out with solid albums this year, try Golden Casket by Modest Mouse.  It’s not their best, but it’s damn good.  Oh, and Robert Plant and Alison Kraus’ new one is pretty fine too.

The genre of “indie songstress who makes sad songs” ran its course for me this year–I just got tired of it–but this album was 2021’s high-water mark. The lyrics are often hilarious as well as sad, so you can laugh while you cry.

IF YOU LIKE INDIE SONGSTRESSES YOU MIGHT TRY…Dozens of others.  There are many of these kinds of records, and many are great.  A few of the ones I enjoyed are the 2021 albums by Julien Baker, Cassandra Jenkins, Snail Mail, Lucy Daucus, and  Courtney Barnett.

It almost feels demeaning to use the word “clever” to describe this debut album’s combination of pop- and traditional-country.  But it is clever.  The album cover, even, looks like it was ripped from the 1950s.  And yet it is decidedly modern and smart.  One of the best debuts I’ve heard in years.

IF YOU LIKE THIS, TRY: Hanna Juanita’s Hardliner, which is also smart lyrically, with wonderful vocal performances.

Funny, insightful, and skilled.  It’s rare to find all three on a rap album.  This album made me think of Open Mike Eagle, a bit, but Wolf’s delivery–and his choices of rhymes–are incredibly distinctive.  You will never confuse him for someone else.

11. The Art of Falling Apart by Serena Ryder

Full of passion and amazing songwriting, Serena Ryder tells the story of how she recovered from addiction. This is truly an amazing record.  It is a sad state that it didn’t get more recognition this year.

A debut album of simple country-folk songs full of faith and quiet intelligence.  Funny and moving, Ms. Robinson is an artist to watch.

The Griselda label/rap collective release so much product each year that it’s hard to keep up–and it makes the releases seem less special.  But they are special.  Each member’s albums put out this year was good–none of it was bad–and some of it was great.  Among the best of the year: Conway’s El Maquina; Mach-Hommy’s Pray for Haiti; Benny the Butcher and Harry Fraud’s sequel to Plugs I Met (my personal favorite, pictured above); and more Hitler Wears Hermes entries from Gunna.

IF YOU LIKE TONS OF CONTENT, TRY…Your Old Droog.  Droog has been making smart music for years, and puts out an album every couple months.  2021 didn’t find him slowing down.  His best this year is probably Time–a concept album–or this year’s releases with Tha God Fahim.

8. Glow On by Turnstile

7. Weight of the World by Maxo Kream

It’s been fascinating watching Kream grow as an artist. This album continues his maturity from a trap rapper to an adult with a complex past and a willingness to reveal it.  Fearless and powerful.

IF YOU LIKE THIS, TRY: Boldy James and Alchemist’s Bo Jackson.

It is so rare to find an album these days that is all about being happy. Even the name, Jubilee, has a smile.

This is the only album to make it on to both this list and my list of the best covers of the year.  Queen Esther’s album is fantastic.

4. In These Silent Days by Brandi Carlile

I don’t know how it is possible for Brandi Carlile to keep getting better. Her last several albums were amazing, and this one is even better.  Lyrics and vocals wrapped around beautiful music that will warm your heart, break it, and then sew it back together.

IF YOU LIKE THIS, TRY…There are several folk/Americana-adjacent albums on this list.  Queen Esther.  Emily Scott Robinson.  I loved them all too much to relegate them to an “also try” position.

It is hard to find a rapper (or anyone, frankly) with a better command of the English language.  Simz strings words together in ways you’ll never anticipate, borrowing nothing, and constantly surprising.  This is a dense album, one that demands repeat listens.

2. I Don’t Live Here Anymore by The War on Drugs

Like Brandi before them on this list, WoD keep getting better with each album.  This latest one is the perfection of the sound they’ve been honing for years–a collection of swirling meditations…With hooks!

1. The House is Burning by Isaiah Rashad. 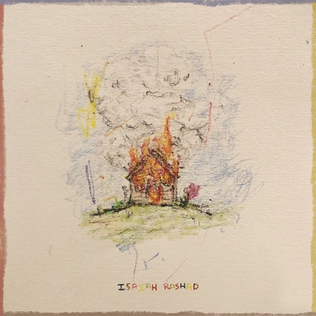 Absolutely brilliant.  A celebration, and one of the best modern examples, of Southern rap.  Rashad bridges the spaces between conscious rap and trap.  A most excellent album.