Home
Berkeley Place
WHO SHOULD THOR FIGHT NEXT…AND OTHER NEWS

The best way to get people wondering who your next villain will be is to drop a vague clue and say no more.  The head of Marvel Studios recently promised that the next Thor villain will be a “major” new one.  After all the Loki-lovin’ ladies stopped screaming, he added that it won’t be Thanos.  Enchantress is the obvious choice, or Hela, but how about somebody really offbeat?  My absolute favorite Thor villain is The Absorbing Man, and although Crusher Creel couldn’t carry a whole movie, he’d make for a great opening sequence.  My preference for Thor 2 is, of course, Frog Thor, but we all know that won’t happen.  Barring that, I vote for a  Sinister Six:

I bet none of my wishes are met….So, on with other news (about the sequels to Sin City and Kick Ass, among other things) after the break.

KICK ASS 2.  It will written/directed by B-picture creator Jeff Wadlow (“Cry Wolf” and “Never Back Down”), and the first act of the film will be the Hit Girl miniseries.  I did love the character in the movie, and Chloe Moretz is simply phenomenal, but this sounds like overkill (forgive the expression).  She’s most interesting in small doses; what made the first movie so cool was that the main character was swept up, gradually, from his fantasty version of superheroics into an increasingly violent world.  I’m not sure that there’s anything really left to say with a sequel.  That was certainly true with the comic book—Kick Ass 2 has been just plain awful.  It seems like a gratuitous money grab.  Kick Ass, in many ways, was very similar to Mark Millar’s brilliant (and better) graphic novel, Wanted, which also made for a good movie that I can’t imagine would have a good sequel.  Leave well enough alone, Mark, and focus on your newer stuff: A Superior movie could be cool….

NEW YORK COMIC CON MERGES WITH NEW YORK ANIME FESTIVAL.  Attempting to compete with San Diego, the two Cons will merge.  No doubt, this will warm my oldest son’s heart—but it’s still too crowded to safely take a 12-year old.

G.I. JOE RETALIATION POSTPONED.  Argh!  The movie looked great in previews, but it’s been bumped from June 2012 to March 2013.  Quite a movement.  The official line is that they want to convert it to 3D, but we all know that that can’t possibly be true.  Unofficial explanation for the move is that, basically, the movie sucks.  Another unofficial reason is that they killed Channing Tatum’s character, but now that’s he’s become a megastar they want him to live for the sequel or at least get more screen time.  There’s just no explanation that bodes well for this movie.

IRON MAN 3.  Lots of leaks from the set.  Everyone already knew that the movie will incorporate Warren Ellis’ groundbreaking “Extremis” storyline—probably one of the best Iron Man graphic novels of all time—but now we know that the movie will include Mandarin as well as Iron Patriot and two lesser-known Iron Man villains, Coldblood, and Firepower.

SIN CITY: A DAME TO KILL FOR.  Apparently, the film will contain two original storylines.  Why, when you’ve got such rich source material, would you not mine it for all it’s worth?  My guess is that director Robert Rodriguez wants his own stamp on the series.  Which is fine, I guess, based on the changes Frank Darabont made to The Walking Dead.  Movie creators aren’t potted plants, after all—they’re artists. 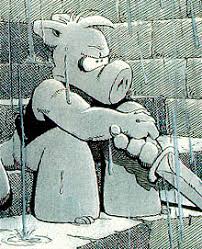 DIGITAL CEREBUS!  Cerebus the Aardvark is one of my favorite comic books of all time.  At least, the first 200 issues or so.  It kinda broke down towards the end, but, like Buffy the Vampire Slayer, the endgame was still interesting even if it wasn’t handled as well and represented a huge left turn from where the series had been before its “last season.”  But you can’t get it in a digital format, at least not legally.  So Dave Sim has taken to Kickstarter to seek funding to digitize the “phonebook” black and white reprints that, to now, have been the only way to read his work.  He promises that it won’t just be scanned and uploaded either; according to his page, he says he will convert the comic’s most famous arc, “High Society,” “into digital files by producing a HIGH SOCIETY combination e-book, audio book/ digital graphic novel/ oral history/weekly serialization at (so far) iVerse, Diamond Digital and Comixology.”  If he gets over 6 grand, he promises to do the same with all Cerebus books.  But the best part is that the digital versions will include the beautiful covers for each issue, which are not reprinted in the paper anthologies.  Oh, and by the way, he’s already doubled the $6k goal and the fundraising continues…Dave promises to offer something special to all contributors.