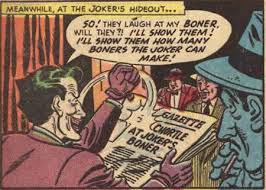 Time for another installment. I really got diarrhea of the keyboard this week.  Lots of cool items to sift through here, but I think I’ll start with a new feature, before the break:

4. Punisher: Franken-Castle. Thought it looked stupid? Heard all the criticisms? Well, now you can judge for yourself. I recommend it. Yeah, it’s weird. And no, it’s not really a Punisher book. But it is a cool comic book story.

2. S.H.I.E.L.D.: Architects of Forever (paperback). Hickman’s offbeat, wild, and exceptional miniseries that has nothing to do with Nick Fury and everything to do with Leonardo Da Vinci. I guarantee you’ve never read anything like it before, and Dustin Weaver’s art is tremendous.

Honorable mention: X-Men: God Loves, Man Kills. One of the first, and one of the greatest, Marvel graphic novels gets reprinted at last!

Okay, now hit the break for news about the great Sweet Tooth/Jonah Hex crossover (sort of); the return of the Red Hood; Warren Ellis cartoons; the Deadpool movie; the Luke Cage movie(?); and much more!

I usually lead with movies, ‘cause that’s what most folks are most interested in, but this time there’s lots of exciting news about comic books, so I’m starting with them. After all, we have them to thank for all the movies . . .

WICKED COOL LINK! Follow this link to see what comic books were on the stand the month that you were born.  Nerdcool!

THE DISNEYFICATION OF MARVEL (BEGINS). At WonderCon, Marvel’s new Ed-in-Chief Axel Alonso intimated that Important People at Marvel think that “all comic books should be rated PG.” Obviously, this would be end of Marvel’s MAX
material, and might even mean that some of its edgier mainstream books (Deadpool and Dakken, e.g.) could be toned down. If this is what Disney plans to do, I have three words for them: Stupid, stupid, stupid. I would bet dollars to donuts that the vast majority of money spent on comic books is spend by folks who, like me, are over 18. I know the movie franchises are big money

makers, but guess who is buying the tickets? Again, folks like me, who are over 18.  The idea is to have enough variety on the shelves so I can sit and read Amazing Spider-Man with my kids and then go off to bed and scoop up Criminal or DeadpoolMAX on my own. This could be the beginning (or the continuation, depending on your perspective) of the end for printed comic books, folks. Sad but true.

JEFF LEMIRE AND JONAH HEX. I have to confess that I’ve only read one issue of Jonah Hex by Jimmy Palmiotti and Justin Gray. The book was great, by the way, but comic book westerns just aren’t my thing. But I might have to dig in and get issue #69 in July, ‘cause it features art by Jeff “Sweet Tooth” Lemire. His spooky, simple style will be the perfect complement to this off-beat book.

Kree-Skrull war story)—is returning to New Avengers with that book’s “point one” issue (16.1), in September. It will feature the return of Norman Osborn as well. Christ, look how good that art is on the left side of this very post. I can’t wait to see this!

D.C. COMICS PRESENTS: NIGHT FORCE. The first four issues of this 1980s horror classic written by Marv Wolfman and illustrated by Gene Colan came out on April 27 as a $7.99 reprint. Gene is very ill and needs money to support his medical treatment, but I don’t know if DC is donating any of the proceeds of this reprint. Anyway, it’s a great chance to see Gene drawing Dracula for the Distinguished Competition—his work on Tomb of Dracula for Marvel is legendary.

CROSSED. Avatar Press’ foray into the world of the walking dead, created by the mad geniuses Garth Ennis and Jason Burrows, was pretty good.  Unfortunately, other than the initial run, there hasn’t been a single Crossed trade paperback.  Makes no sense. And it’s particularly irritating, since one of my new favorite writers, Eisner-winner David Lapham (Stray Bullets; Daredevil/Punisher: Means and Ends; Young Liars), took over the series after Garth left. They’re saying the trades will come before Halloween. Halloween?!? That’s six months away!

MILLARWORLD. Ego maniac and prolific creator Mark Millar announced that he’s writing several new comics: A series for Hit Girl (of Kick Ass); Supercrooks, with artist Leilin Yu (about a bunch of supervillains who want to do one more score and then retire); a 12-issue series with Dave “Watchmen” Gibbons about spies; and long, ongoing “epic” with Frank Quitely. Millar’s been extremely uneven of late. Superior is one of the best new books I’ve read in a long, long time. Nemesis was pretty awful. His work launching The Ultimates for Marvel was great, but his recent U-stuff is unreadable. We’ll see how he does.

THE RETURN OF JASON TODD (A.K.A. RED HOOD). Batman and Robin, in my opinion, hasn’t been good since Grant Morrison left. But Judd Winick, creator of The Red Hood and generally well-accepted Bat-Writer, is coming on board with issue #23 for a three-issue arc featuring . . . Red Hood! In the story, Todd escapes prison and teams up with Dick Grayson/Damian Wayne Batman/Robin. Basically, three “children” of The Batman. Daddy issues should abound!

PUNISHER. Not only is Greg Rucka coming aboard as writer (can’t wait!), but Bryan Hitch will be doing the covers. I can’t imagine how cool that will look.

BILLY BUTCHER. Garth Ennis and Darick Robertson are planning on ending “The Boys” with issue #75, I believe, but in the meantime the spin-offs are coming fast and furious. The next one will be Butcher, Baker, Candlestick Maker, about the origin of The Boys’ bestiality-loving leader. Trite title, but the advance art looks terrific. Coming in July.

CLOAK AND DAGGER. Multi-Eisner nominee and indie darling Nick “Morning Glories” Spencer and shadowy artist Emma Rios are doing a 3-issue Cloak & Dagger mini to tie into Amazing Spider-Man’s Infested/Spider Island summer event. Regardless of how you feel about events, this one has to be better than Shadowland. Doesn’t it?

AMERICAN PANTHER. Last time, I reported that Black Panther is becoming American Panther, thereby ending the last traces of the 1970s “Black Power” Marvel heroes. (Luke Cage’s 1970s style was killed of when Bendis made him drop the yellow silk shirt.) It’s highly doubtful that I would buy this book, but if anything would make me do it, it’s the fact that the art is going to be by Francesco Francavilla. Anyhoo, if any of you pick up Black Panther: Man Without Fear #521, be sure to drop me a comment and tell me if it doesn’t suck.

IRREDEEMABLE. I admit I’ve fallen behind on Mark Waid’s series. I love it, but it’s so dense and I only read it in trade, so when 5 months go by between volumes, I tend to forget everything that’s going on. Peter Krause is leaving the series with issue #29, to be replaced by father/son team Eduardo & Diego Barreto. Ed Barreto did lots of work for DC back in the 1980s (New Teen Titans, Superman, Batman, etc.), and most recently is known for his work on the Judge Parker comic strip, but he was forced to retire due to meningitis. Apparently, he’s able to return to work now. The younger Barreto has also done some work for D.C., but has also done fill-in work in Irredeemable.

IF YOU ARE READING THIS….Then you are clearly a comic book fan, and I’d like to give you $25 worth of comics.  Go here for details.

DEATH OF (Ultimate) SPIDER-MAN. Ultimate Spider-Man is another book I like when I read it, but that I tend not to keep up with for whatever reason. I know Spidey’s dying and getting a new costume, and I’m sure I’ll pick up the trade paperbacks—maybe at Baltimore Comic-Con, but I just don’t care all that much.  They’re trying to make this a huge “event”—with a six-issue mini-series, Ultimate Fallout. A big Ultimates event actually decreases the likelihood of me buying in, since the Ulti-Verse has pretty much sucked, except for Ulti-Spidey, for several years now. Nick Spencer and Jonathan Hickman are part of the Ulti-Verse reconstruction post-death-of-Spidey, though, so maybe it will all get better.

OKAY, THAT WAS A LOT OF STUFF ABOUT COMICS, BUT WHAT’S ON THE BOOB TUBE?

WARREN ELLIS! Just found out that the Marvel anime line that is set to begin airing on G4 (it has already aired in Japan) is written by Ellis. The four series will be about Wolverine, Iron Man, X-Men and Blade. Anime-tion is by Madhouse. The Iron Man series will feature War Machine, and the Wolverine series will take place in Japan and features Mariko Yashida and her father, as well as Yukio, so it looks like it will be based on the best Wolverine story of all time, and the only one that you absolutely have to read—the original four-issue Wolverine mini by Chris Claremont and Frank Miller.

THE AVENGERS. The cartoon will return when Thor comes back, with a Secret Invasion storyline. Also, DVDs of the first season are on the shelves now.  Definitely worth your time.

YEAH, BUT WHAT ABOUT MOVIES, MAN, MOVIES?!

X-MEN: FIRST CLASS. They’re already talking sequel, folks, this time a 1960s period piece. And for the threequel, 1970s. With all due respect to director Matthew “Kick Ass” Vaughn and producer Bryan “Dark Knight” Singer, let’s not get ahead of ourselves, boys. The previews haven’t exactly lit the world on fire.

DEADPOOL. First-time director Tim Miller has signed on—he’s done a lot of special FX on comic book movies (on X1 and X2, Daredevil and Scott Pilgrim).  I’m fine with this being a low budget movie directed by a guy who’s got something to prove, but is Ryan Reynoldsgoing to be humble enough to sign on to such a project? And I still have doubts that he’ll even let himself get all scarred up and ugly. The title has been revised as well—it will be: X-Men Origins: Deadpool. I for one liked the Wolverine movie, but if this is supposed to relate to that one—ugh. DP was terrible in that flick. Why can’t they just call it “Deadpool?”

SUPERMAN RETURNS. Yeah, it’s Zod after all, to be played by Michael Shannon.  It seems there’s really only one movie Superman story anyone wants to tell.  Sigh.

THE CROW. A reboot is planned, with director Juan Carlos (“28 Weeks Later”) Fresnadillo. No, not the Sandra Bullock movie—the ultracool zombie flick. Nick Cave (yes, that Nick Cave) wrote the screenplay. Are there any Crow fans still left out there?

RISE OF THE PLANET OF THE APES. And finally….New trailer: