LL Cool J called himself the G.O.A.T. (greatest of all time), but Run DMC had more sneakers.  Run DMC tread the gangsta/good guy line, hooking into the mainstream and pretty much breaking rap into the suburbs, but Cool J is a freakin’ movie star who at 16 roared louder than anyone else.

In the end, for me it’s really a toss-up.

10.  Run DMC-The Pete Rock Megamix.  I love this–it’s an amalgam of a whole buncha great Run DMC tunes. This reminds me what geniuses these dudes were, and how their work still holds up.
http://player.groovebat.com/player.swf

9. Mama Said Knock You Out-B.A. Baracus Band. But speaking of holding up, here’s a 2010 cover that rocks hard.

8. Mama Said Knock You Out-Lagawagon. And even foreigners can sound good covering that song!

6. Rock the Bells-Eminem. Of course, the biggest rap superstar of the day has personally covered Cool J. So there’s that.
http://player.groovebat.com/player.swf 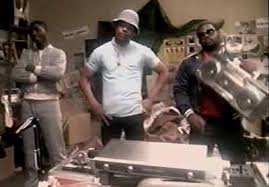 4. Around the Way Girl-Travis Morrison. Okay, but Cool J can do cool and slow and low. (By the way, Slow and Low (the Beastie Boys cut) was actually first performed by Run D.M.C. I’d post it here, but it was released by an RIAA label as an outtake, so sucks for that.)

It’s Whiskey!-Run DMC vs. The Pogues

Trickysharona-Run DMC vs. The Knack