Tons of news this week following NYC Comicon, so let’s just do it all rapid fire style . . . 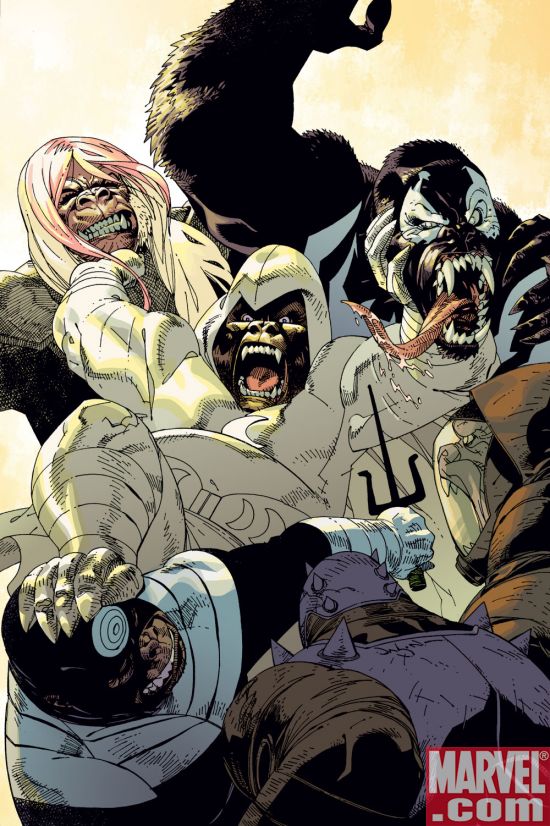 Perhaps the best news out of comicon was that Brian Michael Bendis and Alex Maleev will be re-teaming in 2011 on . . . A Moon Knight ongoing series! This is now officially my most eagerly anticipated series ever. Bendis and Maleev are brilliant together, most recently in the underrated Spider Woman miniseries that collapsed because Maleev couldn’t produce the art fast enough. Here’s hoping he can keep to a schedule for this one. Bendis also said he’s planning to relaunch Alias—one of the most criminally underrated Marvel books of the past 20 years.

First D.C. blinked, announcing a full-dollar reduction of all ongoing titles from $3.99 to $2.99, then Marvel quickly followed suit (on its newly launched titles only).  Does this mean that ongoing print titles are on the way out, to be ultimately replaced by the digital medium?

Whoever heard of such a thing? Unlike the past, when you could rely on Annuals to introduce major characters (like Rogue, from Avengers Annual #10) or weddings (Spider-Man, the Inhumans, etc.), today’s annuals usually have little to do with anything and . . . Kinda suck. Marvel is looking
to change that in March 2011 by releasing a three-part story told in X-Men, Steve Rogers, and Namor Annuals. The characters will be stuck in the Negative Zone (not to be confused with D.C.’s Phantom Zone), and, one presumes, will be fighting dudes like Annhilius and Blastarr The Living Bomburst. Meh.

THE FLASH AND GREEN LANTERN 2.

D.C. advises that both films may be ready by X-Mas 2011. Rumors abound that Bradley Cooper will play the scarlet speedster.

Robert Rodriguez says he’s ready to make the film, but the script isn’t done. He’s looking to make it after he does Spy Kids 4. Guess that means Deadpool’s off his plate?

I’m on record saying that Ultimates Volumes 1 and 2 were two of the best comics of the last decade, and Ultimate Spider-Man has generally been up there as well. As for the rest of the Ultimates line: The Loeb books were terrible and the Millar reboot has been okay but underwhelming.  I thought for sure it would all go away once Bendis and Millar got bored with it, but instead Marvel has been expanding the line. The last announcement was that Jason Aaron and Ron Garney will be doing an “Ultimate Captain America” miniseries that will take take place out of regular continuity and will be about
a different Captain America. I trust Aaron (and Garney), so this seems like an Ultimate book worth getting. To be fair, almost all the Ultimate books have been pretty good (except the Loeb ones)—they just haven’t been, well, “ultimate” for many years.

I guess everything Joss does gets to live on in a series: Buffy, Firefly, Angel, and now Dollhouse—coming in 2011 from Dark Horse and written by Jed (not Joss) Whedon.

We’re looking at four different series, at 16 episodes each, featuring “Iron Man,” “Wolverine,” “X-Men” and “Blade,” and the four series will have “universe bleed”—meaning that the characters could show up in each others’ series. Due in Summer 2011.