Ekko does an excellent job recapping what’s going on in the worlds of DC and Marvel.  Hell, I’ve got a $50/week habit, spend at least an hour in the comic shop every time I go, and he STILL knows more about what’s going on in those universes than I generally do.  However, what about the kick-ass titles published by other houses?  Today, I’m going to highlight a few series that are off the beaten path.

Writer John Layman and artist Rob Guillory bring us the tale of a world not unlike our own save for one very crucial difference.  Avian flu went terribly wrong in this Image Comics-imagined universe, resulting in the government fully banning all poultry products.  This, of course, leads to all sorts of black market, back alley chicken deals, and the rise of the Food & Drug Administration as one of the top law enforcement agencies in the world.  The series starts out with the introduction of one of the newest members of the force, Tony Chu.  Seems Chu has a gift as a “cibopath,” someone who can “read” something’s past by tasting it.  Sort of like Rogue, without the power transfer and only through the gullet.  Of course, he hates the talent, as it allows him to eat virtually nothing without getting grossed out beyond belief.  His boss hates him, of course, ans assigns Chu on some of the most oddest cases you can imagine.  I won’t even get into
the issue where he gets his head dunked in a toilet.  While this may sound bizarre even for a medium that revolves around people dressing up in tights, Layman and Guillory create a brilliant world.  The artwork is fresh and clean.  While not altogether realistically drawn, it definitely is engaging.  The first story arc already is complete and has been packaged as a trade, so now is a great time to jump into the series.  It’s got enough action to keep even the Capes Crowd occupied, but touches upon larger societal issues, as well, like what happens when Big Brother starts breathing down your neck. I think I’ve mentioned Garth Ennis’ The Boys (Dynamite Entertainment) in just about everything I’ve written for Berkeley Place, but now is as good a time as any to jump into the fray.  Trade volume 5, “Herogasm,” was just released.  This arc originally was a mini-series, but it falls into continuity, so I guess that’s their call.  This storyline focuses more on the “heroes” and less on the titular characters, but that somehow makes this more incredible still.  Remember, the premise of this universe is that the Capes are out of control, egomaniacal freaks who are kept on their respective leashes by an uncaring U.S. government and the corporation that funds them.  Herogasm is an annual event where all the “good guys” get together at an off-the-radar resort and take part in some of the most graphic depravities a body could imagine.  Sex, drugs and rock ‘n roll only just barely scrape the surface.  Trust me, you’ll have to read this one to believe it.  Trade volume 6 is due out May 15 and is another great place for first timers to jump in, as it deals with the origin stories of each of the main characters.  While each bio is a riveting read, the one dealing with the Frenchman could be the funniest damn comic I’ve read in ages.  Using every French stereotype in the book, you simply don’t know what you’re missing until you’ve seen baguette jousting.

Avatar Press is arguably one of the more graphic brands out there, and Christos Cage’s Absolution is no exception.  Here, too, superheroes are placed into a far different world than those imagined by DC or Marvel.  In this world, superheroes are government sanctioned police officers.  This six issue mini deals with one such hero taking the law into his own super powered hands.  Not able to stand repeat criminals being allowed back into society only to wreck more havoc, Officer John Dusk decides he must act as judge and jury.  It’s a compelling read, if for no other reason that the character reactions feel “more real” than you’d expect.

This Warren Ellis title, also on Avatar, deals with British ‘combat magician’ William Gravel.  Ellis has used the character in other series in the past, but he’s had this one ongoing for a couple of years now, meaning you should be able to find it in most comic shops.  (SPOILER ALERT) The series just finished its second major arc, wherein Gravel has become the lead magician in all of Britain and has started his own “Minor Seven”–magicians of a power level just below his own.  The series combines gritty detective noir with the arcane, and the effect is potent.  If you’re worried that this is a series about dudes with long beards holding gnarled oak staffs and fighting off dragons, don’t be.  This shows magic in today’s world, and how it can be used as an effective weapon to deal with the trials and tribulations one might face in a contemporary setting.  Plus, they say “bollocks” a lot, and that’s always funny.

Yet another Avatar title, this Ennis book just wrapped up and is without a doubt the most fucked up comic you will ever read.  I don’t care if you’re into homonecrobestiality, Crossed beats that less than halfway through the second issue.  It’s a bizarre take on the zombie plague motif, except the victims are not undead.  People are infected through contact, though, which results in a literal cross of lesions to appear on one’s face.  These folks don’t want brains, however, they want depravity.  How depraved?  Well, a guy gets beaten to death by a ripped off horse cock at one point, and the final issue contains a priest’s corpse nailed to a cross where he was sodomized to death.  Correct, this is not your father’s comic book here.  Readers follow a small band of people simply trying to survive an outbreak which has seemingly overtaken the world.  Questions of morality abound, while characters try to retain their humanity.  While this is not
one at all for the faint of heart, it is for the reader who wants something different out of their comics.  Through most of the series, it was assumed that the Crossed, as the infected have come to be called, are little more than brainless beasts that are all animal instinct.  Towards the end, however, it came to pass that they do have the capacity to learn, which makes their marauding hordes that much more formidable…and scary.

If you haven’t seen the red band trailers for this movie yet, do yourself a favor and watch those now.  [See below!]


Once you’ve had a chance to put your blown mind back in, go pick up the first trade, which tells the story of a “normal” guy who one day decides to become a superhero.  Of course, along the way, others take up the cause, including the most messed up father/daughter team since Mackenzie and John Phillips.  I would have thought the movie wouldn’t dare tread with where this comic goes, but the trailers lead me to believe that perhaps they will.  Unlike Batman and other “normals” who put on a cape, Kick Ass focuses on a more realistic take.  For the titular hero’s first outing, he gets his ass beaten so badly he’s in a body cast for months.  By then, of course, he’s grown addicted to the rush, but I don’t want to give away too much more.  Definitely worth picking up before the movie hits.

Our first foray today into Image Comics, Four Eyes (written by Joe Kelly) tells the story of a young Enrico in a world like our own.   Set during the Great Depression, the one main difference between our two worlds is the fact that dragons exist here, and are the subject of an underground fighting gambling ring.  Of course, Enrico’s father was once a handler of these creatures, before he was killed.  Now Enrico is trying to find out more about his lost father and the gang with which he ran.  These issues have been sporadic at best (three issues since October 2008), but I understand the fourth is on its way shortly.  While it is hard to comment on the storyline with so little to go on, I can say unabashedly that the artwork by Max Fiumara is incredible, with an incredible eye for detail. 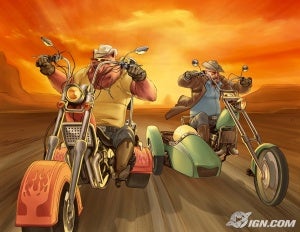 I’ll close with another Joe Kelly title on Image.  Bad Dog is the story of a werewolf with issues (Lou) and the dirtiest man of the cloth this side of the Preacher (Wendell).  The two are bounty hunters, and continue in Kelly’s notion of the anti-hero.  This is not a monster book, regardless of the werewolf tie-in.  For that matter, if it weren’t mentioned in the dialogue, Lou could be any humanoid character with a past that’s catching up with him.  There’s no talk of full moons and silver bullets.  Readers just need to accept that in Kelly’s new world, werewolves exist and need jobs, too.  Surprise, surprise, there are only three issues of this one out over the past few years, too, but what’s been printed has been a great read so far.  Where Ellis and Ennis tend to go profane with their ideas and dialogue, Kelly is not above graphic sight gags.  And to be completely honest, most of them are funny as all get out.  There’s a scene in the second issue that shows the sign language equivalent of a variety of sexual hand positions that’s worth the price of admission on its own.  Throw in the fact that they’re given by a horny middle aged secretary, and you can see the comedy gold to be mined here.

None of the above books are intended for kids, but it seems like very few comics actually are written for that demographic anymore.  That might be a shame for younger readers, but its created riches beyond belief for those of us who are a bit older.