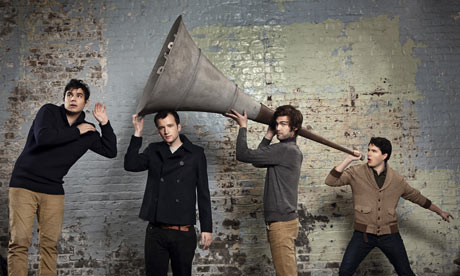 I have a question.  But before I ask it, I want to make one thing clear: I’ve listened to Vampire Weekend’s debut album quite a few times (I’ve played the song “A-Punk” 13 times, according to iTunes) and I enjoy it.  I also enjoyed Contra quite a bit.  But now that that is out of the way, here’s my question: Does anyone really love Vampire Weekend?  And by “love” I mean, does anyone feel an emotional connection to their music?  Does it move you?  Does it speak to you?  I find the music catchy and clever, and it definitely makes me tap my toes, much like The Talking Heads but without the R&B influence.  But David Byrne’s disaffected, disenfranchised pop still managed to connect–with moments of humanity (“Stay Up Late”), vulnerability (“Memories Can’t Wait”) and rebellious alienation (“Burning Down the House”).  I don’t get that from VW.  In fact, I often feel like they think they’re better than me–like they don’t want to connect, they just want to show how hip they are.  Like some of the kids I used to resent in college who never fought for anything but, nevertheless, had their own particular talents.  If I’m writing about it, I must have liked it enough to recommend it, so don’t take this all the wrong way.  The band is a lot of fun.  I guess I would have liked a little more substance to the whole thing, since the individual members clearly have so much talent.

That said, Contra is much like the band’s eponymous debut: It’s a collection of infectious, toe-tapping, perfectly timed and crafted pop songs.  There’s a little more Elvis Costello here than Paul Simon, making this album a little rougher (but only a little) and, in that regard, a little more interesting.  But if there’s one word to sum up the album it would be “cute.”  Very cute, charming pop.