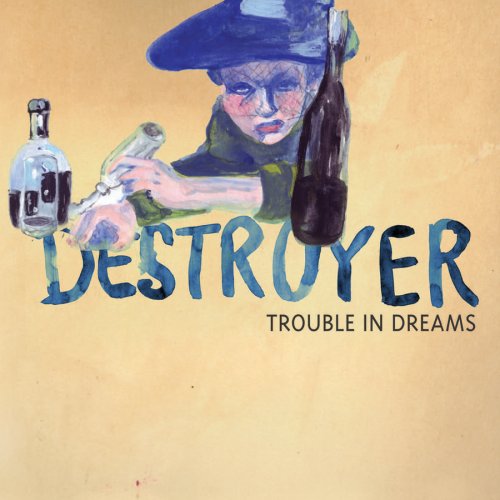 Destroyer’s new record, “Trouble in Dreams,” has this wonderfully hot song called “Plaza Trinidad,” which features the lines: “I was caught in the middle of a world war/This time it was dense light vs. the azure/I was high as a kite, I was never coming home tonight/And I couldn’t believe how loud it was . . .” And it’s not a Bowie cover. But holy Christ it sounds like one.

Only the most knowledgeable fans of obscure indie bands will remember that Dan Bejar is yet another castoff from the New Pornographers, a band whose output has always been uneven, and one whose solo career has never exploded or shown as much promise as Neko Case or A.C. Newman. His songwriting often seems intent on putting a thumb in your eye, defying you to tap your toes to a beat. Destroyer’s last album, “Destroyer’s Rubies,” was about half good and half WTF?!? Although there are definite similarities, “Trouble in Dreams” is a far superior work, in that it seems to have a thesis.

“Trouble in Dreams” begins with “Blue Flower/Blue Flame,” a psychedelic/T-Rex kinda jam that’s immediately gripping and catchy, even while being obscure and riffless. What is the song about? No idea. “Blue Flower Blue Flame,/a woman by another name is not a woman/I’ll tell you what I mean by that, maybe not in ten seconds flat, maybe never.” That’s basically the entire lyric. But hear it once, and it will be stuck with you.

Most of the songs move along without well-defined corners or boundaries, without apparent beginning or end, and yet the entire work feels cohesive, albeit retro. This is the least quirky, most accessible Dan Bejar album I’ve ever heard, but only if you throw it back in time to 1978. It’s Bowie, it’s Devendra Banhart, it’s Dylan, it’s Marc Bolan, it’s Mott The Hoople, it’s Moby Grape . . . Some may call it shoegazer, but in this case, that’s not an apt moniker for a record so grounded in acoustic piano and guitar, and bereft of soaring vocals. Bejar doesn’t sing forlorn love songs, he makes . . . Well, I’m not sure what he makes, but it’s amazing.

This is one of the best albums of the year. In an indie rock field that is becoming overcrowded with covers, tributes, and other projects wholly derivative of 1970s smooth psychedelia, Bejar has created a project that looks back at that era, embraces it, and brings it forward into the double-oh decade. The result is an album that is entirely original.

All The Young Dudes-Smashing Pumpkins (Mott the Hoople)