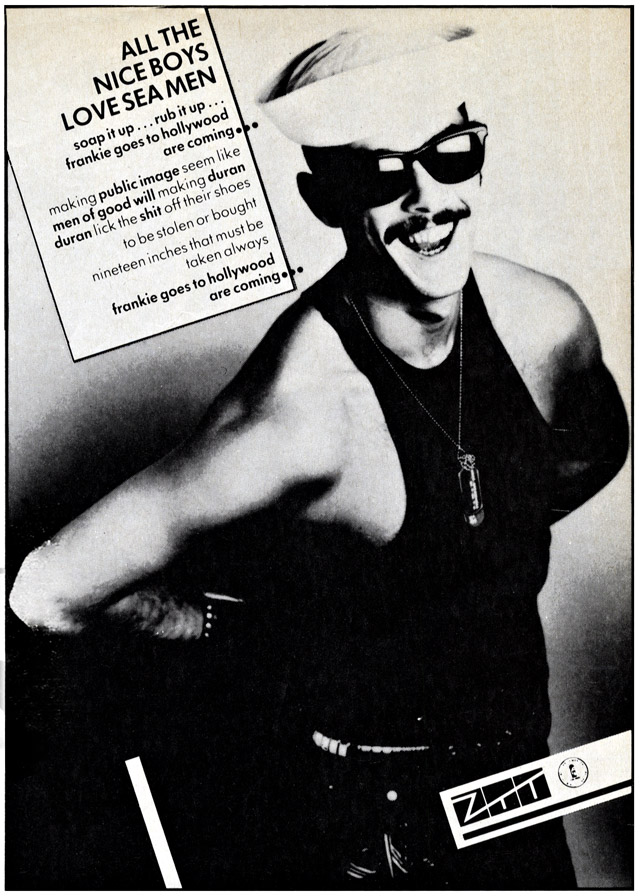 the end, could be one of the greatest of all tunes?

I’ll answer that with a question: How could it not be?

The song was banned by the BBC as “overtly obscene,” sold over a million copies, and spawned shirts with huge words.

Teens have always loved naughty songs—double entendre is what made rock and roll in the beginning—and every decade ratchets up the filth factor.  From Bill Haley to The Rolling Stones to Led Zeppellin to Madonna and then to Frankie Goes to Hollywood.  And socially, this was a band that everyone knew was gay but, unlike with Culture Club, you rarely heard people speak homophobically about them.  Because while some people can’t necessarily relate to empathic lizards (Karma Chameleon), everyone wants to come.

How did everyone know that the band leaders were homosexuals?  Well, it wasn’t exactly kept secret (see the real ad for the album, at right).

Plus, the video took place in an S&M bar.

It was banned, of course.
FURTHER LISTENING: Although the follow-up single, Two Tribes, also sold over a million copies, nobody remembers it.  These guys were a one-hit-wonder band.
COVERS: Most are just meh. Judge Dread’s was the first, and the Bloodhound Gang song samples Relax. Blondie’s cover is the most surprising.