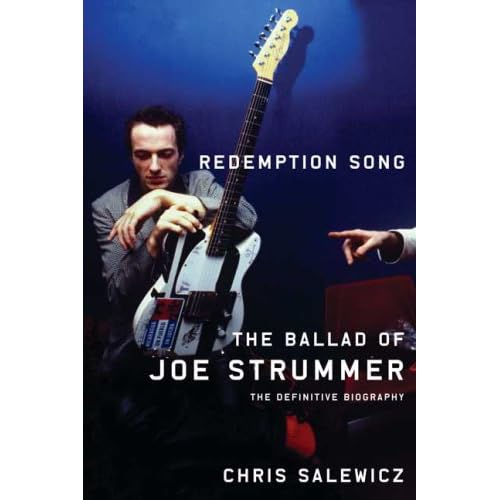 Iâ€™m not much of a reader. I read once a year, when I go to the beach. Other than that, Iâ€™m just too busy. But for a bio about one of my favorite musicians ever, Joe Strummer, I made an exception.

â€œRedemption Songâ€ by Chris Salewicz is two-pounds of text, telling the tale of Strummer from top to tail. Although he was a journalist, and Joe was intensely private when it came to the media, Salewicz seems to have had incredible access to both Strummer and his mates, and as a result the author knows a wealth of intimate, revealing, and very entertaining information (both stories and pictures, including personal letters and drawings), which he imparts freely. For example, I had no idea Joe was born in Ankara, Turkey, and was the son of a diplomat (and not a bankrobber, as Joe later wrote in song).

Beginning the book with the end of the story, Joe’s untimely death, Salewicz takes us back slowly, peeling away the funeral and then recent events before Joe’s death and around the time of his resurgence, and then, gradually, through his whole life. Salewicz shows how The Clash drew important music from out of the protozoan, D.I.Y. punk movement that, while interesting, was generally producing a lot of noise but not making a lot of sense. But mostly, he tells how and why The Clash broke apart just as they were about to become superstars, with the individual members scattering to do solo projects (many of which as good as anything they did together).

The bookâ€™s main section is devoted to Strummer’s retreat from the public post-Clash, which according to Salewicz represented a crushing depression brought on by (or at least made more serious due to) Joeâ€™s addiction to marijuana, his brother’s suicide, and other dark family problems. But the book is not depressing, and manages to pull out a degree of optimism in the final act, when Strummer returned with The Mescaleros (before dying of heart failure in 2002).

My sole quibble is that thereâ€™s not enough about the musical legacy of Joe Strummerâ€”his incredibly deep influences on modern punk, alternative and ska-infused rock, and the general ethos of a rock star. We recently posted a whole truckload of covers of Clash songs, and still only barely scratched the surface of the complexity and variety of that phase of Joe’s life. But after ska punk, when he went solo, he created rootsier rock and blues, made great contributions for soundtracks, and even wrote for other musicians. This is discussed in the book, but the impace on the industry is barely touched on.

But thatâ€™s not a completely fair criticism, either, because it’s not really what the book is about. Itâ€™s more about the rocker-as-rebel, the icon, and the demons that tortured him. Itâ€™s a book about Strummerâ€™s soul more than his work, which makes it different from all the other Clash books out there. And well worth your time.

Also worth your time: A few songs in tribute.

Get Joe’s stuff for cheap at e music!