This is the one where Aunt May “dies.” Of course she’s not really dead.  It’s just a trick to flush out the Burglar who killed Uncle Ben, and now wants to kill Aunt May.  The thing that kills me about this arc is how it completely fucks with Spidey’s origin.

Turns out, the killing of Uncle Ben wasn’t random.  The burglar hid some gold in the Parker house and was trying to go back and get it.  That means that it doesn’t matter that Peter didn’t interfere with a random crime when he didn’t stop the thief in Amazing Spider-Man #15, it means he didn’t stop a guy with a connection to Peter Parker.  The whole point of Spider-Man is to take responsibility for others–to stop evil wherever it is–not just to act in your own interests.  It’s a bad tweak of the origin that undercuts the themes of the entire series and character.

Anyway, he got busted before he got it, so now he’s come back to finish off May.  (Don’t worry about the “she’s already dead” part–it’s equally ridiculous.) But now we get to the important part.  Peter attacks the burglar… 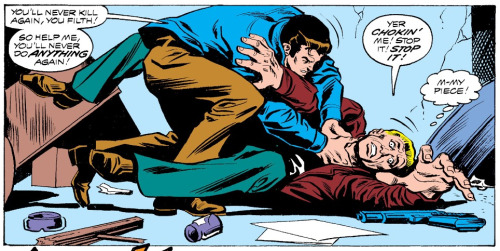 And nearly kills him by choking him.  Then, minutes later, he puts on his costume and… Scares him to death.

This will be a minor scandal much later, in the ’90s, when the strangulation scene is revisted. It’s pretty clear here that the strangling didn’t directly kill the burglar, but at the same time, it contributed to his death soon after.