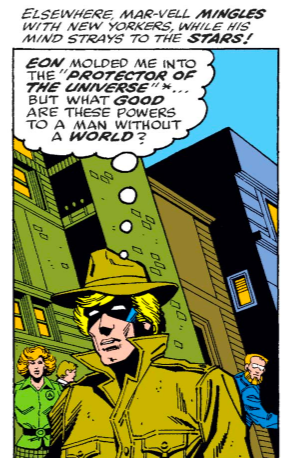 Trenchcoat disguise entry.  Look at the bystanders in the background.  They’re not fooled at all. 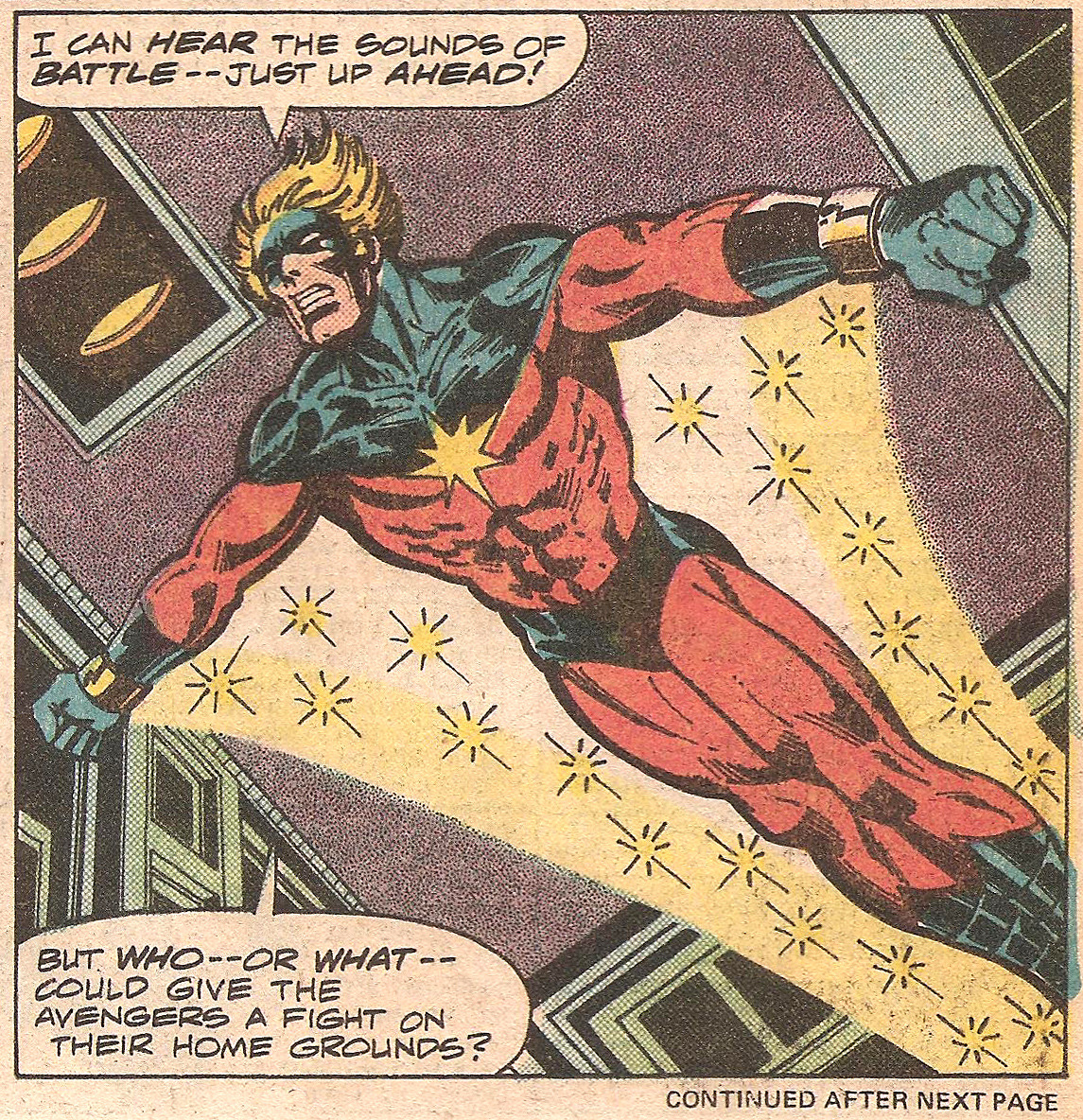 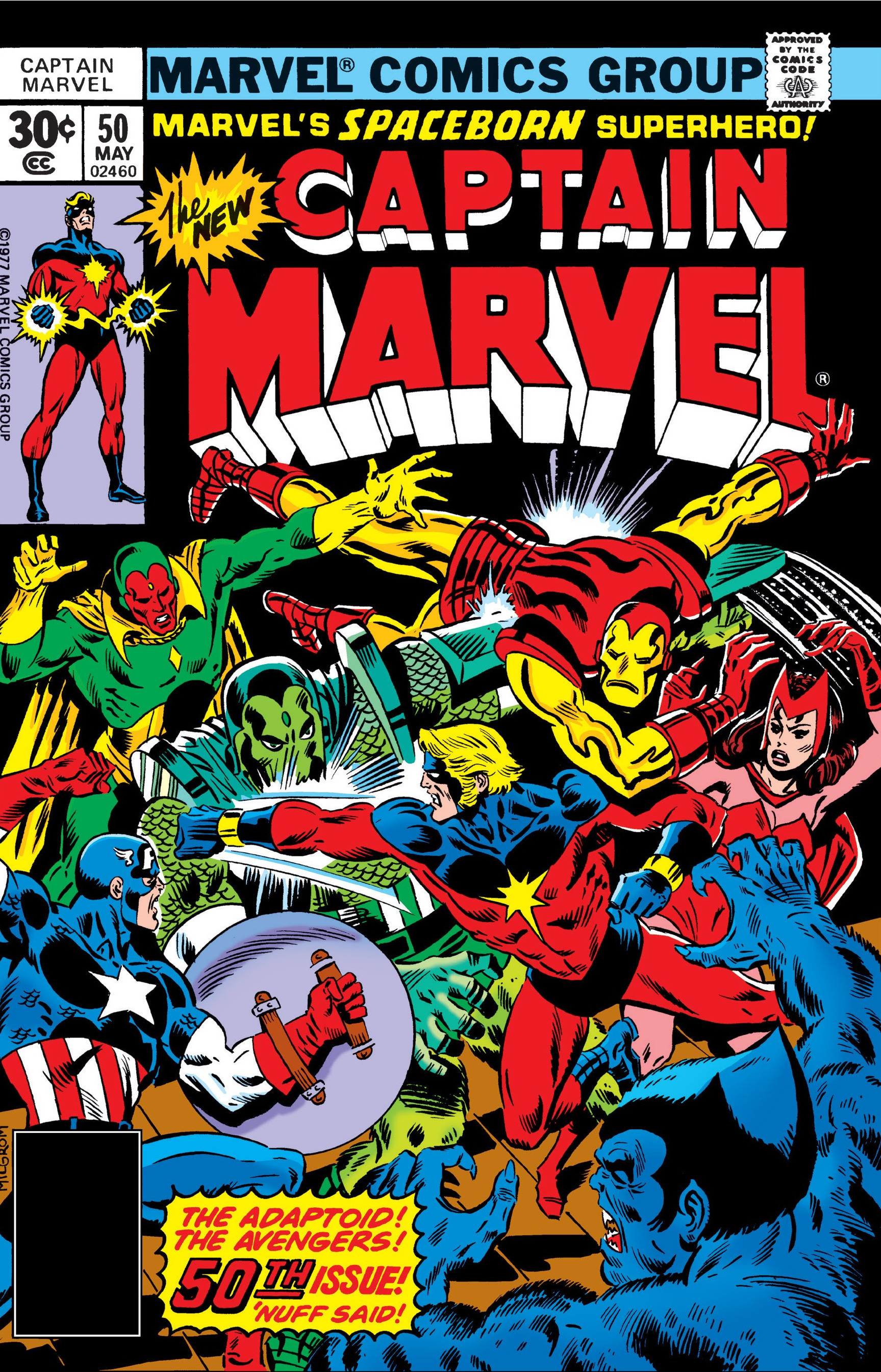 With this issue, the book is titled “The New Captain Marvel,” and the story is titled, “To Begin Anew.”

It’s not entirely different.  Al Milgrom has drawn him before, but there is a new writer, who separates Rick Jones and Captain Marvel (finally!).  Author Scott Edelman would go on to win awards in Science Fiction and become a prominent editor in the comics field.

There’s also an aside where we see that Ronan the Accuser still has the mind of an eight year old, and is living on a farm with some kind old folks.  Kind of like young Superboy.

Rick Jones, who used to get laughed off stage, now has an act with a black woman called “Rick and Dandy,” and they’re selling out their shows.  I’d love to know if there’s a story behind this sequence, which seems to emphasize that Rick Jones is a genre-busting artist–maybe the first indie rocker?  For one thing, why did Marvel feel the need to emphasize that point.  But for another, new series author was allowed to keep his copyright on the lyrics.  Marvel was not known for respecting creators’ rights at the time (and it still isn’t, really), so why did they let him own something outright that appeared in a Marvel book? Jarvis the Avengers’ butler goes to see them, then invites them back to Avengers mansion for a nightcap, where they and the A-team are ambushed by Super Adaptoid.  During the battle, Adaptoid–who has the power to mimic the powers of anything he sees (including armor and shields, etc.)–adapts to Mar-Vell’s nega bands, which are the very things that force him and Rick Jones to share a body, and when the android bangs the adapted bands together…Wammo!  Rick Jones returns from the Negative Zone, standing alongside Captain Mar-Vell!

With the two being free, maybe this book can stop being a Shazam wannabe and take on its own identity.  At a minimum, we won’t get the “transformation/switch scene” that appeared in every single issue up to now.

She’s not real important now, but I should mention that this is the first appearance of Dr. Minn-erva.

Creators: Scott Edelman and Al Milgrom
Grade: B.  Well written, despite the use of one of the lamest villains at Marvel, and moving the book in a positive new direction.