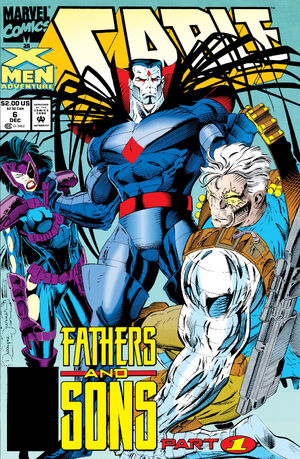 Kane and Cable (just realized how close that sounds to Cain and Abel) are back from the future, and they have an altercation with SHIELD agent GW Bridge until Cable agrees to use his futuristic tech knowledge to help Hammer walk again.  All these characters used to be in 6 pack together.

At the same time, Cable’s space station, Graymalkin, has been blown up and X-Force has tech from it.  At Cable’s request (before he got lost in time), Domino is hunting down X-Force, but now Bridge tells Cable that Hammer and Grizzly–the last two 6-packers–are working with Domino, along with Vanessa-the-Domino-impersonator, so Cable’s afraid they’ll get their hands on Graymalkin and use it to attack him.

Confused?  Me too.  Everyone is friends and everyone is enemies.  But don’t worry, none of it really matters.

So, Cable’s and Domino’s groups locate each other, fight, and, like most ’90s fights, nothing gets resolved and nobody wins or loses.

Then Cable decides to go after Tolliver, Deadpool’s employer, after learning he’s a time-traveler too.  Domino is going to help, but then Mr. Sinister shows up.  But don’t worry.  By the end of these issues, we know that Tolliver is Cable’s son. 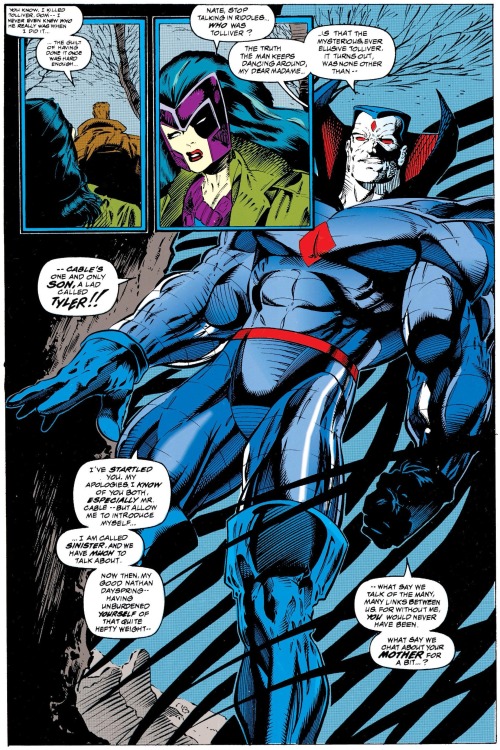 Is all this feeling very random to you, too? 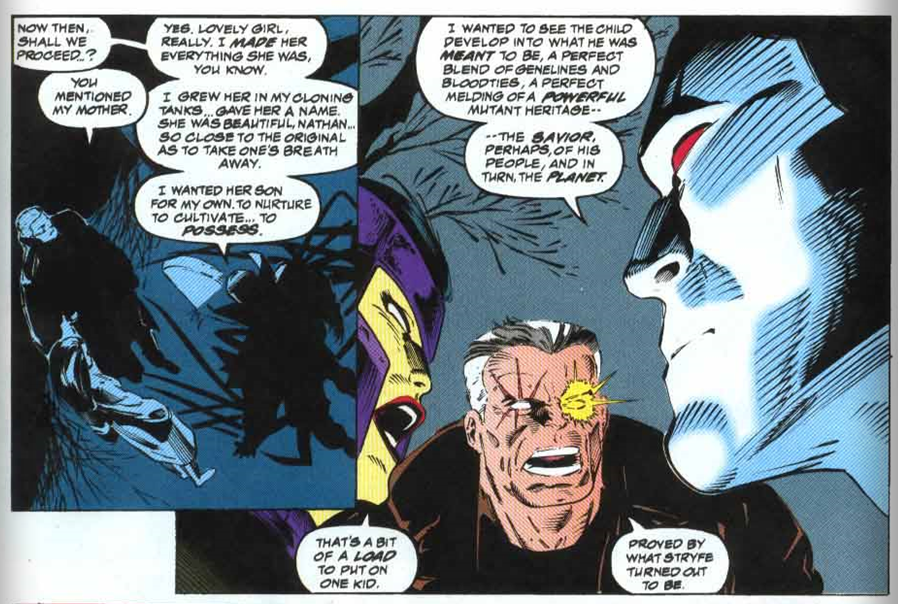 Somehow Sinister makes Cable fight his friends, we learn that Cable got the Legacy Virus as a kid and was cloned, and the clone was raised by Apocalypse, and grew up to be Stryfe, who is now back in the “present time,” just like Cable.  So they’re clone bros.  And Stryfe has the cure for the Legacy virus.  Oh, and Sinister tells Cable how he altered Madelyn Pryor, Cable’s mommy.

So there’s a lot of “information” in these issues, but not much actually “happens.”  Just lots of dramatic talk…. 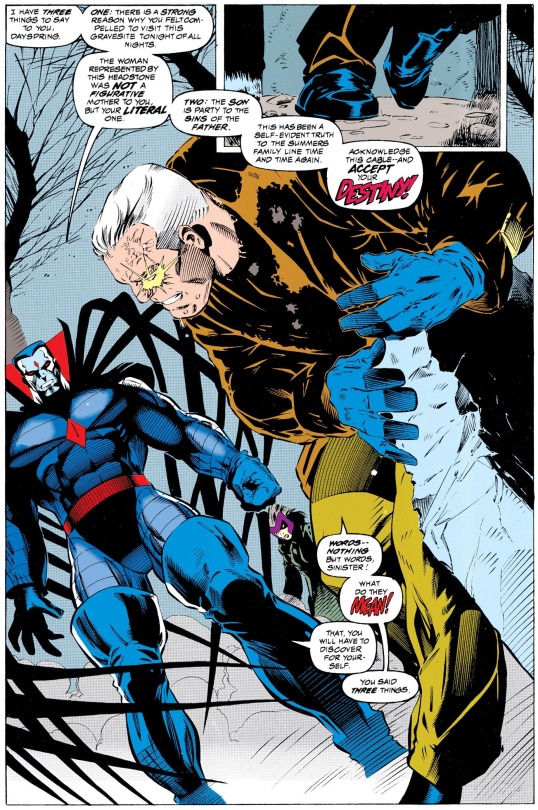 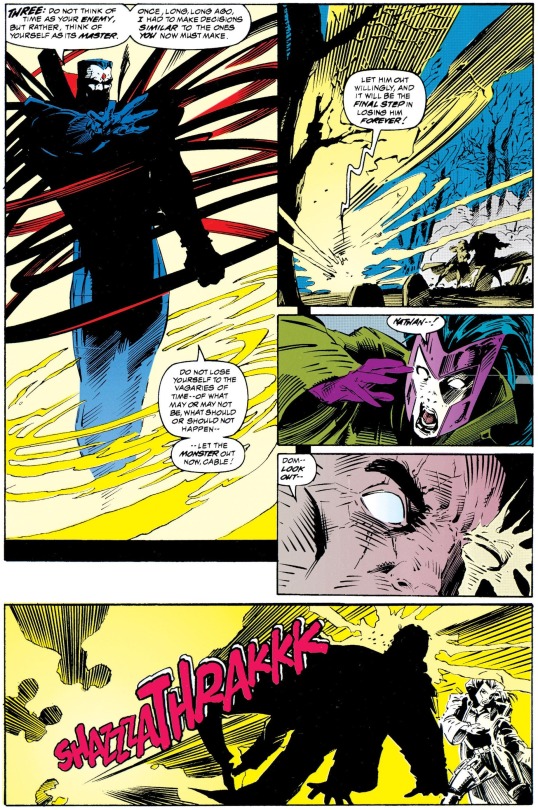 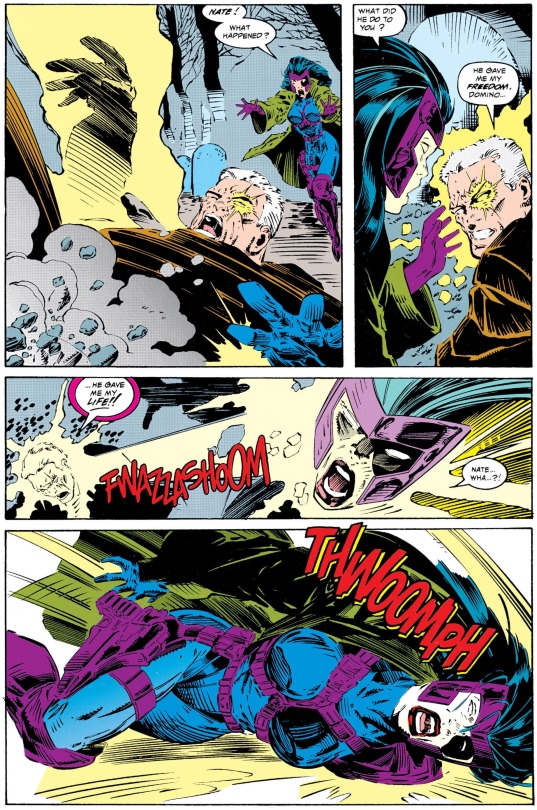 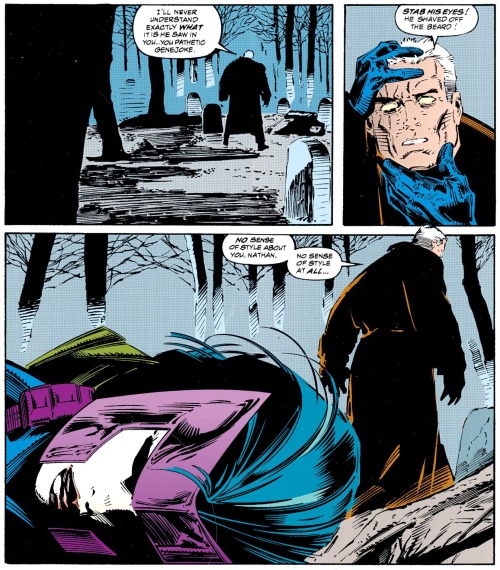 Creators: Issue #4 has weird credits.  It’s “bought to you by” Fabian Niceiza and Art Thibert.  So I assume they wrote it together.  Then the art has no less than three pencilers, but (and it’s ambiguous) I think two of them only did one page each.  They’re listed as “Reddington, Wylie and Koblish.”  And if three pencilers weren’t enough, Rob Liefeld is given “thanks” for the “art assist.”  So really, it’s anyone’s guess whose responsible for this issue.  #5 is just Nicieza and Darrick Roberson.  Then #6-8 have art by Aron Wiesenfeld.
Grade: C