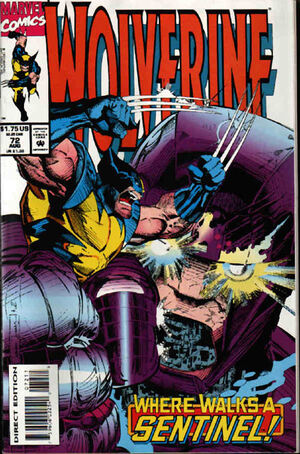 In this issue, a Sentinel squeezes Wolverine and inflates his upper body like a balloon.

Actually, Wolverine and Jubilee try to disable an old Sentinel but actually just remove its prime directive to hunt and kill mutants.  This leads to the Sentinel becoming self-aware and wondering what the point of existence is (since he no longer has his programmed purpose). He decides the point of his existence is to perpetuate it—to do anything that will serve Sentinel-kind.  Which makes sense.  Robots can’t procreate sexually, but why wouldn’t they want to propagate via other means?  He succeeds in reviving a few other dormant Sentinels, and making them self-aware as well, until Wolverine and Jubilee finally destroy him.

Also, Gateway teleports Jubilee into her own past where she sees her parents die and learns more about her origin.  I didn’t realize Gateway could enable time travel—I thought he just did real-time teleportation.

This is definitely one of the more interesting Wolverine solo stories of this era, where the character was overexposed in the extreme.

Creators: Larry Hama, with art by Dwayne Turner and Jim Fern
Grade: B