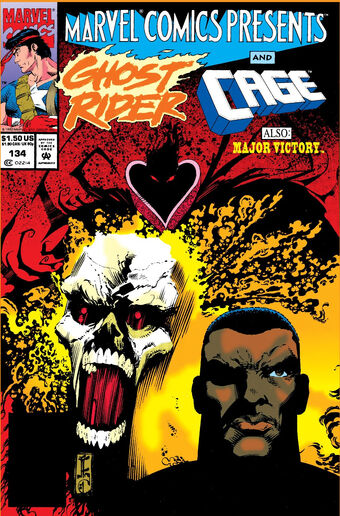 Two remarkable things about this edition of “Marvel Team-Up Starring Ghost Rider.”  First, Ghost Rider and Luke Cage don’t even meet until the third installment of the story.  And second, they don’t fight when they see each other.  They immediately team up.  Although, they do bicker a little.

The story starts with Luke’s long-running model girlfriend Harmony being killed by a demonic cult.  You can pretty much assume where it goes from here. Sadly, as you can see, the dialogue is very stilted to stereotypical black dialect.

It’s odd that a major-minor character like Harmony, who extends back to the 1980s beloved Power Man and Iron Fist book, would be quickly and summarily killed like this, especially in an anthology comic rather than in Cage’s own solo book where the death could have “mattered” and had some kind of character-building ramification.