I know it’s gimmicky, but I think it’s fun to have a group of villains who team up solely based on the fact that they are all based on birds.  Killer Shrike, Cardinal, and new characters Tanager and Sparrow team up to form…Air Force!

And their first goal is to help Cardinal get revenge on the new Turbo, as well as the other New Warriors “brats.”  I didn’t think Turbo joined the New Warriors team, but they’re (remember, two teens—a girl and boy—share the Turbo suit) training with Nova when the bird villains attack. 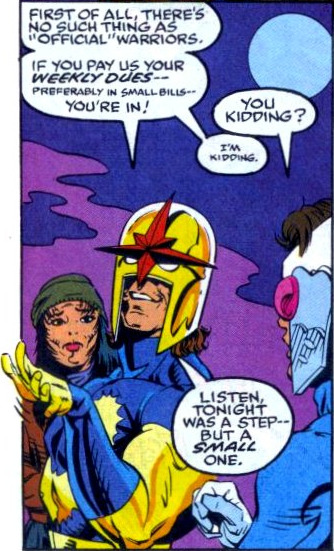 Nova is trying to get Turbo to join.

There’s also a check-in with the development of Carlton LaForge, who will become Hindsight.  Nothing important, just a slow-boil of his origin as he discovers Speedball’s secret identity.

Another fun issue of this series.