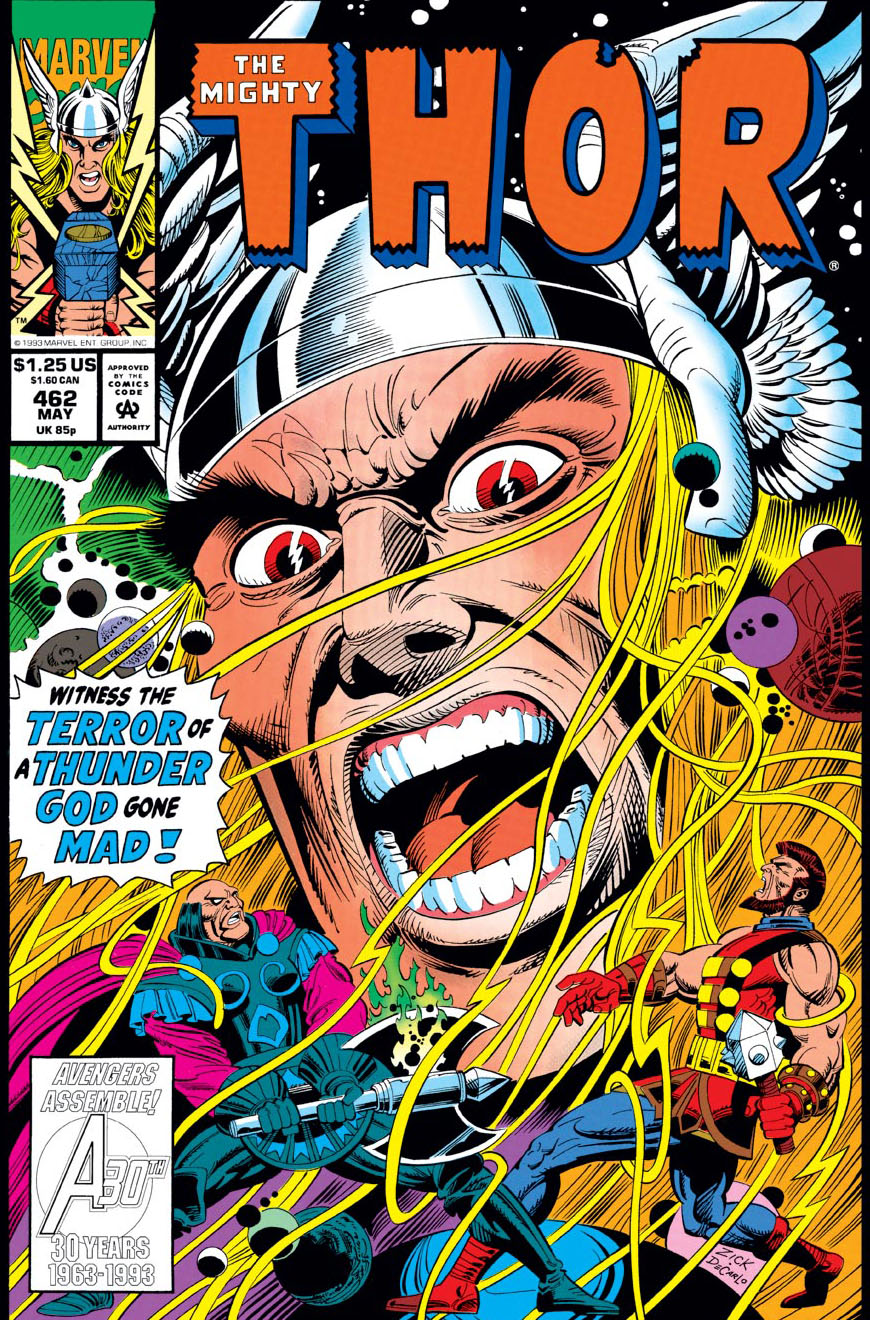 Thor is crazy and wandering space, and the Greek Gods are trying to capitalize on it.  Actually, he’s supposed to be crazy but all he’s doing is forsaking the Asgardian ways that, frankly, haven’t been good to him.  He’s saved the kingdom of the Norse Gods countless times, only to be banished over and over again.  In fact, instead of coming to help him, Odin is already saying this is another cause for banishment.  Dude.  Your son was literally kept in a trash bag by Morbius while some douche named Eric Masterson stole his identity.  Have a little compassion.  Sif tries to get Odin to change his mind, fails, then goes to see if Thunderstrike can help, and ultimately takes on some of the Greek Gods herself.

There’s some fun in these issues, like the fight with Ares.

In which Thor kicks the Greek God’s ass, and then Ares goes whining to Zeus about how Thor beat him (he says Thor did so unprovoked, but in the story it’s clear that Ares was trying to take advantage of Thor’s unsound mind and attacked first). 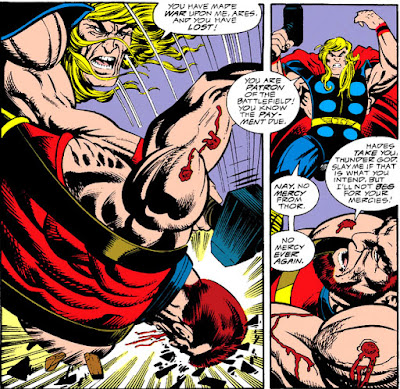 This leads to another Herc vs. Thor fight. 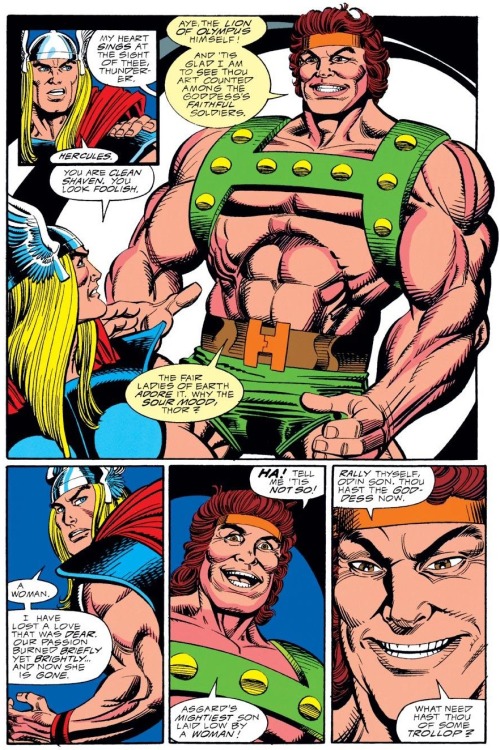 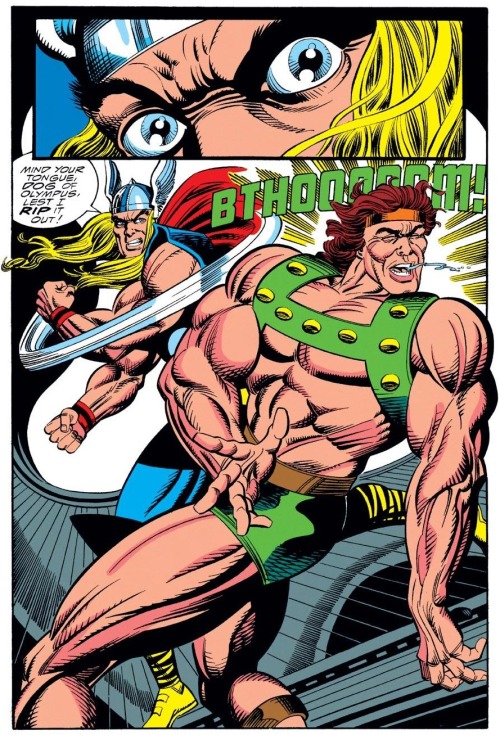 Which is interrupted by The Goddess. 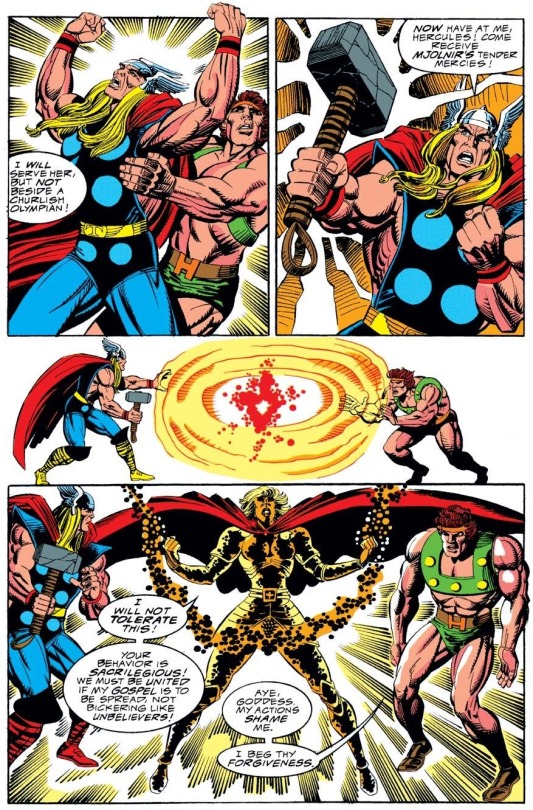 Who takes both characters into the next Marvel event. 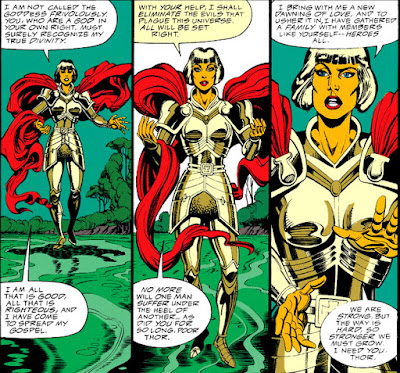 Because there wasn’t enough going on in this comic.  We had to tie-in to the Infinity Crusade.

In that context, there’s lots of guest stars and a decent crazy Thor vs. Super Skrull fight. And also a closer look at the Thor-Drax fight that happens in the Crusade, just in case you wanted more detail. 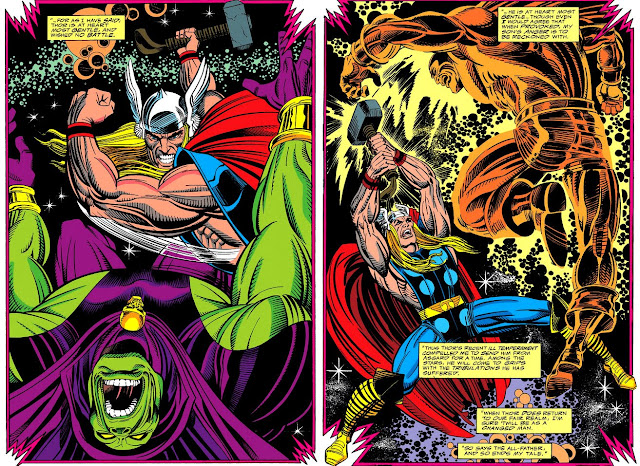 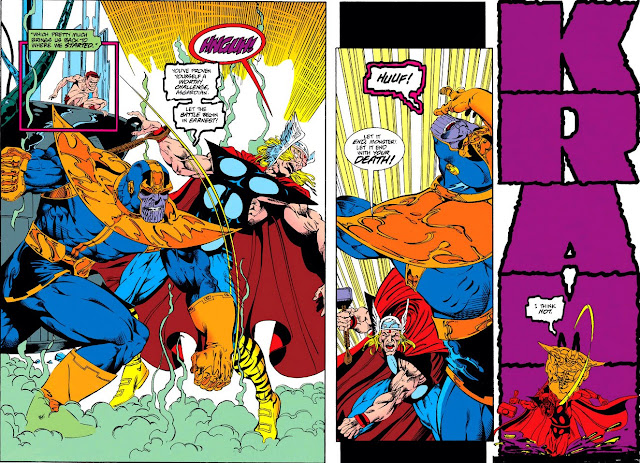 Eventually, the Infinity Crusade story dumps Thor into the valkyrie’s realm, and we get back to his ongoing story–and the massive, year-long Blood and Thunder story.

It’s all very distracting, and the simmering discussions between the Greek Gods on whether they can manage crazy Thor is much more interesting. It’s frustrating that for almost five issues Thor gets sidetracked into the Crusade–even though the issues aren’t bad.  It’s just that the main Thor story seems to have a lot going for it.

Creators: Ron Frenz and Jim Starlin co-write #462 with art by Bruce Zick.  Then for #463-466, Frenz writes alone with more horrible Zick art.
Grade: Overall a C+ that would have been higher if Ron Frenz had done his own pencils.