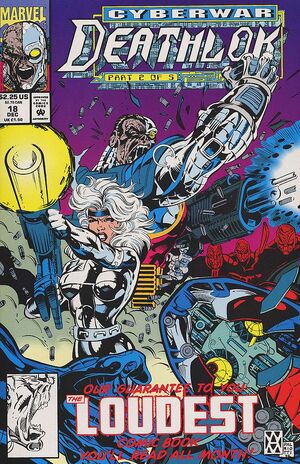 Promoting this as the “loudest” book of the month is saying something in the 1990s.  Or I should say it’s shouting something, eh?

The new Michael Collins Deathlok meets the original John Kelly Deathlock.  Actually, it’s just Kelly’s consciousness, trapped in a computer.  The Deathlok Computer (which is what the Deathlok character talks to all the time) killed Kelly when it could not control him. So now there’s a three-way conversation in a single body between Collins, Kelly and the Computer.

Collins was a scientist who kind of became Deathlok by accident, whereas Kelly was a soldier who the military wanted to cybor-ize.  And the computer is just trying to further goals of its programming, often impacted by the evil Roxxon corporation.

This three-way argument-in-a-body goes to Europe to stop the Ultimatum Corporation from creating its own army of cyborgs and Silver Sable, also located in Europe, helps him out.  This leads to a cyborg war, in which Kelly pushes Collins to let his military training take over.

Over the course of the story, Kelly’s mind is transferred to a new cyborg body, Siege… …Thus introducing a new cyborg.  Also, we learn that Michael Collins’ human body is intact, and SHIELD knew it all along, creating suspicion in Collins/Deathlok about Fury’s real motives in allying with him.

Lots of good external and inner conflict.  I’m not sure that adding a new personality constitutes character development, but I’ll take it.

Greg Wright was also writing Silver Sable at the time, and issues #11-12 continue this story.  A branch of Hydra operating under the sea and building super cyborgs, and therefore Siege wants to get his hands on them (he’s kind of like a Malcolm X for cyborgs).  Sable hires Stingray for help when she, too, is recruited to get the ‘borgs. Nothing great here, but nothing terrible either.