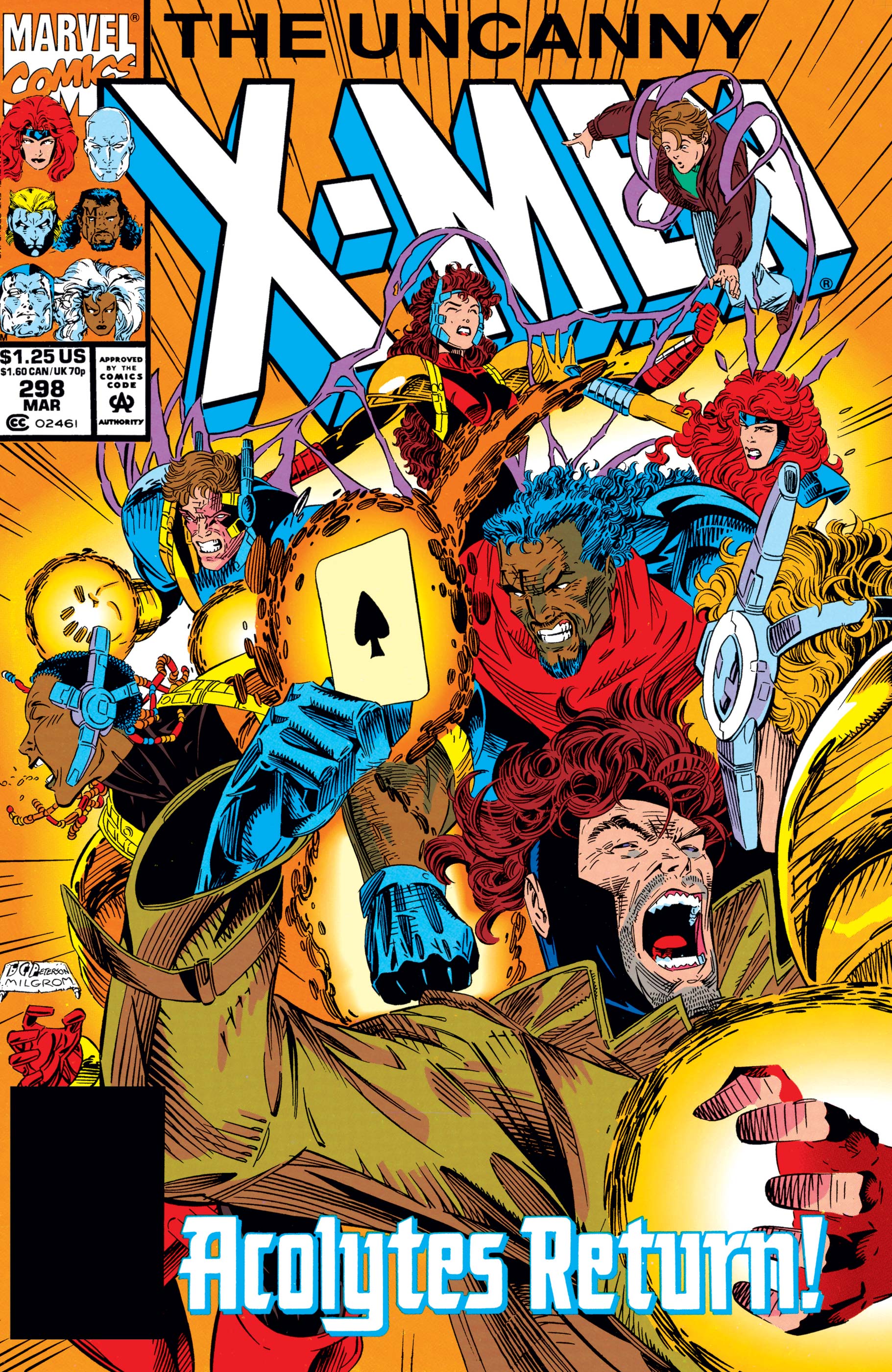 The Acolytes, who jumped to fill in the void left by Magneto’s death, attempt to kill a mutant at a school, and the X-Men step in to protect the kid.  Why do they want to kill the youngster?  Because he has Downs Syndrome, which makes him an inferior homo superior. I think that’s an interesting spin on their mission.  Not sure Magneto would have supported that. 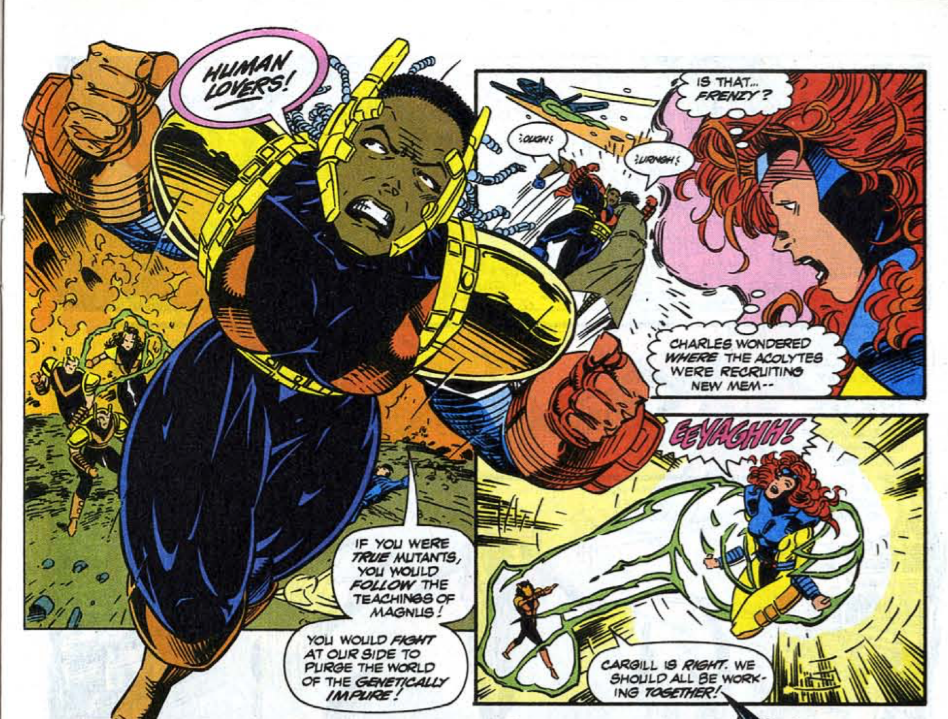 And speaking of Magneto, Forge and Agent Henry Peter Gyrich find the remains of Magneto’s Asteroid M, which has crashed to Earth. 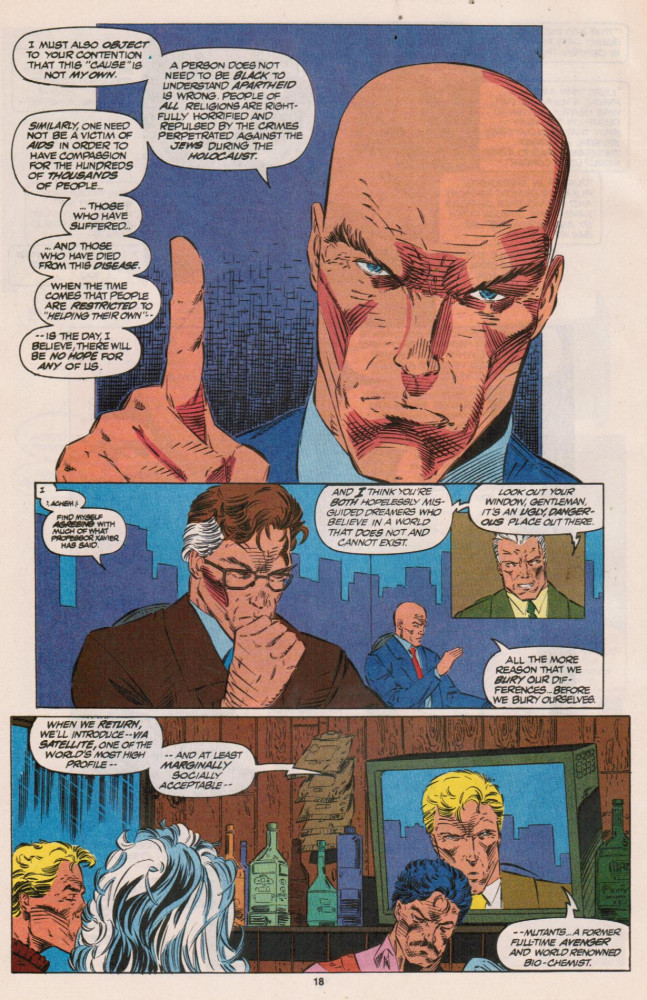 Meanwhile, Professor X and Beast are debating Senator Kelly on the public stage about the role of the Acolytes and the “mutant threat,” when Graydon Creed–who is revealed to be Sabretooth’s son the Sabretooth miniseries that came out at the same time of this issue–shows up and argues that his group, the “Friends of Humanity,” are justified in violating civil rights to suppress mutant threats.  Here’s how Beast responds: After the debate, we learn that Senator Kelly has a psychic on staff because the unnamed character reaches out to Jean Grey telepathically to suggest that Kelly isn’t as big an enemy to the X-Men as Creed’s hate group is. 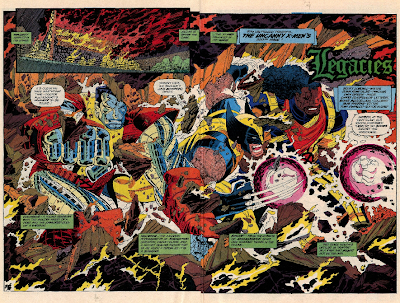 Then in #300 John Romita Jr. returns to the series for a big X-Men vs. Acolyte battle.  The Acolytes kidnap Moira MacTaggert, and the X-Men, along with Nightcrawler from Excalibur, save her. Interestingly enough, the Acolytes don’t hold her in a tube, which is the traditional way to capturing villains. 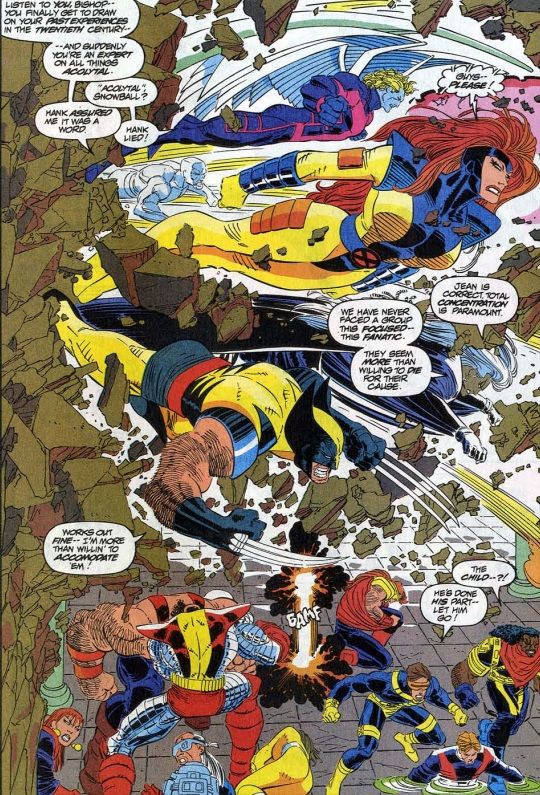 There are so many new characters and so many villains introduced in these and other 1990s X-Men issues that it’s really hard to keep up.  I don’t tag them all–I try to only tag those who will be around for more than an issue or two. 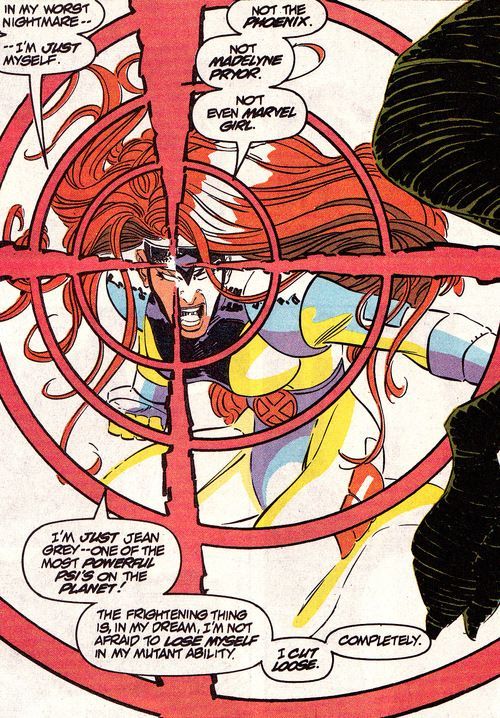 But a giant issue-long fight is a nice way to allow readers to get to know all of them without doing the traditional “pose and provide a text box” type of introduction.  Some of the important ones that first appear here include Graydon Creed, Amelia Voght (who is an Acolyte but later quits and joins up with Charles Xavier, and will be shown to have had a long-standing relationship with Xavier),

The X-Men free Moira and capture several Acolytes in the end, but the cliffhanger says that they were unable to prevent the bad guys from releasing a virus into the mutant population.  This will be the Legacy Virus, which will be a key component of the X-world in the coming year.

These issues also continue the “contest” between Fabian Cortez and Gamesmaster, and it’s suggested multiple times that Magneto isn’t actually dead.  He’s such a major character that I can’t imagine people thought Marvel would really let Chris Claremont kill him, but at the same time it JUST happened.  They could have let his body get cold so his inevitable return would feel like more of an event.