Starting with the panel above…Wow.  “Violating me on every conceivable level of reality.”  And we can’t see below the waist?  Wow.

And yet I feel the same way.  Tom DeFalco has overstayed his welcome on F4.

Anyhow, Sue may get violated in the panel above, but in the panel below she’s pretty badass in how she penetrates Galacuts.

Human Torch is in love with the skrull who pretended to be Alicia, got him to marry her, and then gave birth to an egg.  The egg is taken by The Collector because it’s a unique object.  Torch and the girl skrull try to fight off Collector but fail.

The rest of the team can’t help because they, with Namor, are busy looking for Franklin Richards. He’s been kidnapped to a “What If?” world, and Uatu the Watcher breaks his non-interference oath to get the FF to go to that world (ostensibly to save Franklin). And that alternate reality is one that got all messed up after Uatu broke his non-interference oath.  Got it?  Watcher interfered, screwed up an entire reality, so he interferes again to try to fix it.

Uatu is so stupid sometimes.

Anyway, an evil Reed Richards is behind it all.  We get a huge time-stream/alternate story with Inhumans and Avengers joining in, and in the end Uatu breaks his noninterference oath in a pretty major way…By killing Reed Richards.  But don’t worry, in the end it’s revealed that this Watcher is Aron, not Uatu.  And that’s an alternate reality Reed.  And here’s his funeral:

We did get a very cool cover out of it, though, paying tribute to King Kirby….

This story also introduces Vibraxis (of Wakanda) and Devlor (an Inhuman) who will later be part of a spin-off comic called Fantastic Force. 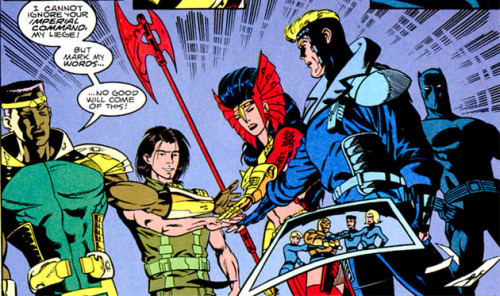