Editor Al Milgrom ran a strip at the start of every issue of Marvel Fanfare, and in this one he recognized the magazine’s failing sales and joked about adding the X-Men to the title to make it sell better.  The irony here is that Chris Claremont wrote the first five issues of these series, featuring The X-Men.

On the “editori-al” page, Al Milgrom notes that sales for Fanfare aren’t good.  And yet, Marvel will keep publishing it for about fifty more issues.  That would never happen in today’s world.

The main story was by Roger McKenzie, a largely forgotten writer who deserves more recognition, and artist Rick Leonardi, about Vision.  It was good….

It was Vision versus Klaw and Mad Thinker, who use Klaw’s sound-constructs to create their own version of the Fantastic Four, beat the crap out of Vision, and provoke him into going after them.  It’s basically one long hero vs. hero fight.  It’s not bad, but since when can Klaw create realistic, independently acting humanlike constructs that can duplicate powers like Torch’s fire and Thing’s strength? The second story is also one long silly fight.  Quicksilver is acting like a douche, the rest of the Inhumans find out and think he’s trying to destroy the Royal Scepter, and rather than talk it out Quicksilver leads them through a several-page fight before proving that he never meant to steal it after all.

Real great art in this issue.  Even the pin-ups are cool. 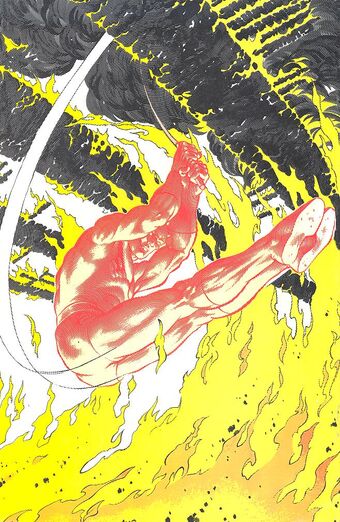