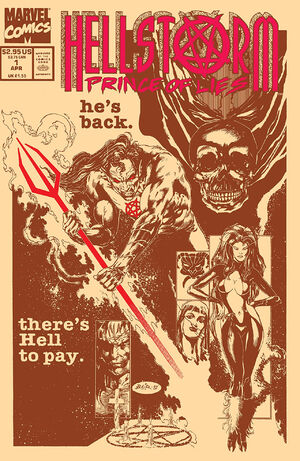 Without explanation, the Son of Satan formerly known as Daimon Hellstrom becomes Hellstorm. The mythology of this comic, which involves Gabriel the Devil Hunter and a bunch of dark arts practitioners for profit, don’t matter a whole lot, so I’m not going to spend a ton of time on them.  In the first issue, we learn that there’s a fake Damon Hellstorm wandering around, Gabriel the Devil Hunter is pursuing him, and the real Son of Satan breaks out of hell to take down the faker.

I generally don’t love Marvel’s back magic comics, but this one is fairly good.