After they first meet (and, of course, fight for no reason), Nighthawk pokes Spider-Man in the chest.  Then they team up and fight The Looter, who now calls himself Meteor Man, but he’s just as unmemorable.  Nighthawk awkwardly recuses himself from the battles (he thinks Meteor Man needs mental help and not fisticuffs), and Val decides she’ll help take him down.  Yes, a demigoddess is apparently needed to help a superhuman with spider powers take down…The Looter.  And Wyatt Wingfoot gets possessed! 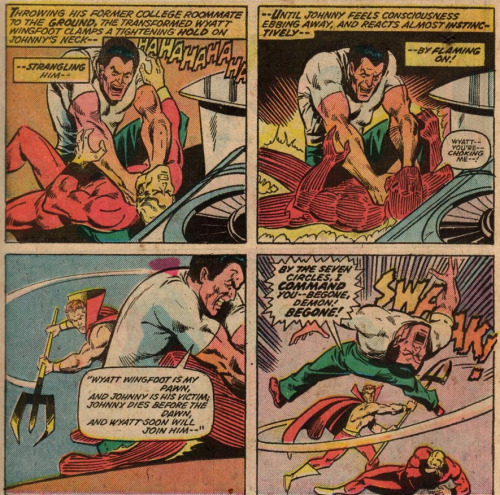 Meanwhile, some cult leader named Jeremiah has decided his disciples need to kill Spider-Man.  At this point, Strange and Human Torch take over the story, and along with Valkyrie take down Jeremiah.

Maybe it’s because this is basically a Defenders story, but the church angle feels a bit Steve Gerber-y, rather than Gerry Conway (who tends to be more conventional).  Overall, the interconnectedness of these issues makes it feel like a more complex story, and it’s definitely less “stupid” than the earlier and more simplistic issues of Team-Up, but the book still has a ways to go before it’s really good.