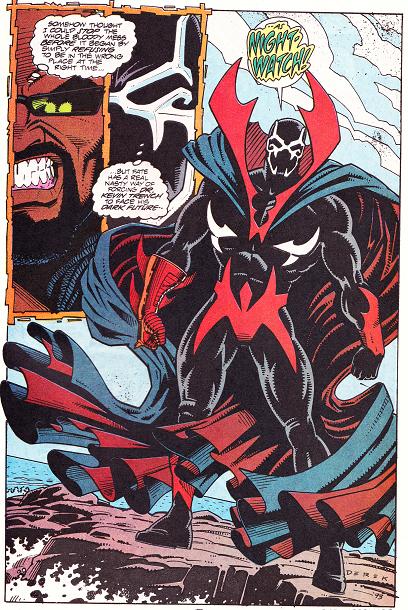 This issues are…significant(?)…because they introduce Nightwatch.  They also resolve some of the threads left hanging after the Name of the Rose storyline.

Nightwatch is a black guy, and they’re still kinda rare even in 1993. 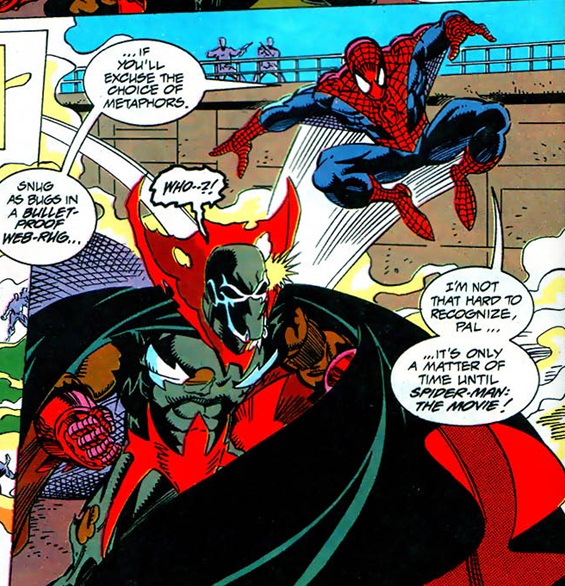 He’s also a doctor.  He’s introduced in a series of interludes/back ups drawn by Derik Yaniger.  Happily, the back-ups do relate to the rest of the comic (it’s a sad feature of 1990s Marvel books to have a lot of unrelated, unimportant filler back-ups, and these are not those).

Dr. Kevin Trench is a recluse on the same island that Alfredo Morelli washes up on at the end of the Name of the Rose story.  Trench doesn’t like criminals with powers because he used to be one, so now he re-dons his costume and fights Morelli.  He then leaves the island to embrace a future as a hero.

Nightwatch never becomes part of the main story, but his origin does deal conclude the Alfredo Morelli storyline, so it’s relevant overall.

Back to Name of the Rose threads, we see Blood Rose return and he’s in an all-out war to eradicate Kingpin’s crime empire.  Spider-Man, never content to let his enemies fight it out if doing so might lead to some pesky deaths (even if it’s just criminal-on-criminal homicide), interferes.  But of course he ends up teamed with Rose in an “uneasy alliance.” 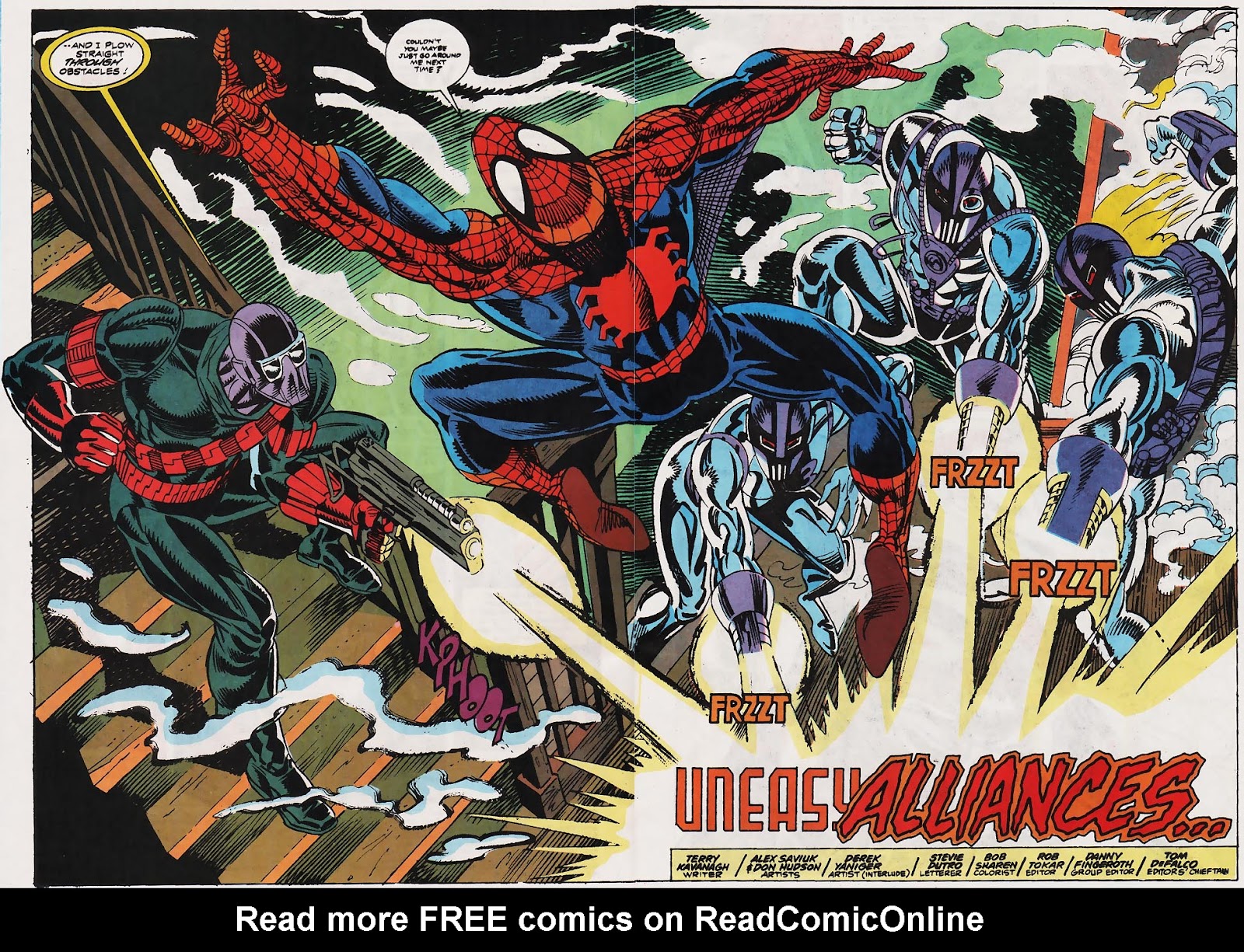 Rose is also teamed up with The Foreigner, who has “Cyber Hunters,” and by the middle of the story we learn what we’ve already suspected… 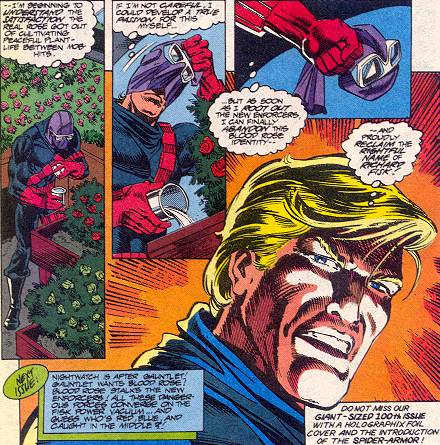 Rose is really Richard Fisk, Kingpin’s kiddo and the original Rose.  Along the way, a new team of Enforcers is introduced with the worst cover pun I think ever in Marvel history. 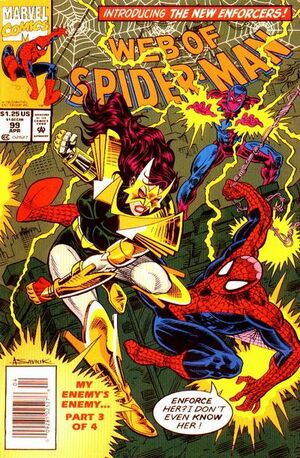 The team consists of a new version of The Eel, a new lady named Blitz (kind of an Electro copy), a new guy called Thermite (basically Blizzard), they’re led by The Vanisher (really?!?), and also include Super Adaptoid, Dreadnought, and….

At this point in Marvel history they still really didn’t know what to do with Dragon Man, and it’s sad to see him the casualty of this story arc.

Anyway, right about now you should be thinking: Vanisher has fought the entire X-Man.  Adaptoid has held his own against The Avengers.  It took Iron Man a whole issue to beat Dreadnought.  So how can Spider-Man take on this team? 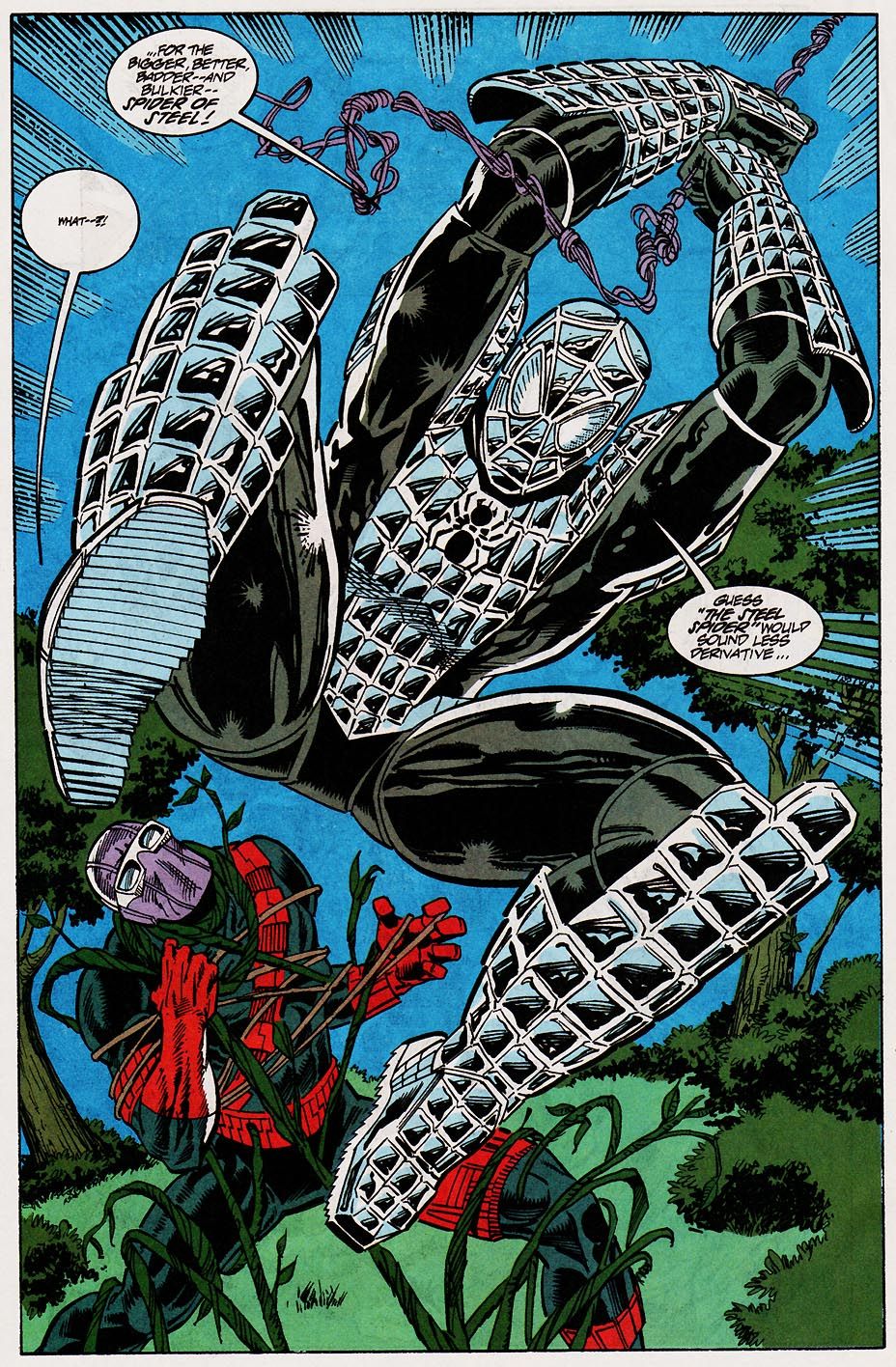 I always dislike “augmented” Spider-Man stories because part of the point of the character is that he’s an “every man” with powers and, more importantly, he’s defined by his own vulnerability.  But even more important, if this armor makes him so powerful, why does he ever stop using it?

True, in this story it gets destroyed, but why wouldn’t he build it again? 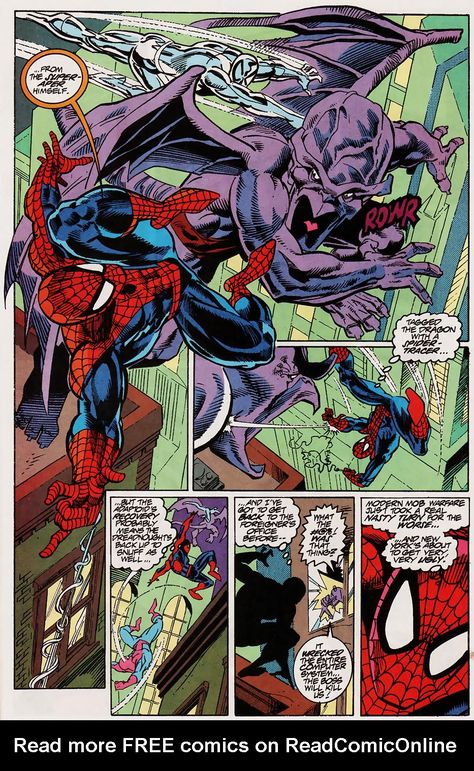 Anyway, in the end, these new enforcers and Blood Rose are all defeated and turned into the police.

And we see that the new Enforcer team has even more members–it’s basically a syndicate of D-list villains.

This is a plus, to me.  I love minor villains.

It also explains why a lame-o like The Vanisher was the leader–he only led the field team in this issue.  Guys like The Controller and Fixer are also on the team, behind the scenes.