Bruce’s wife Betty is sick of him running off to be Hulk, especially after he confessed last issue that he used to choose, on purpose, to become Hulk, so she spends the night talking (and really just talking) with another man.  Bruce goes to get her back and the dude punches him. Bruce and Betty make up, but then Bruce starts to transform and accidentally hurts her.  As Hulk, he feels bad for hurting Betty but also scoffs at having those kinds of emotions because they’re weak and Banner-ish.

And just so the whole issue isn’t about relationships, Hulk takes on a gamma zombie called Half Life who died a gamma bomb explosion a year ago, and he punches him into pieces.  But now he knows someone is setting off new bombs–which will be important later.

Half Life will return for one more story, which isn’t enough appearances to be worth a tag.

Peter David is so great. 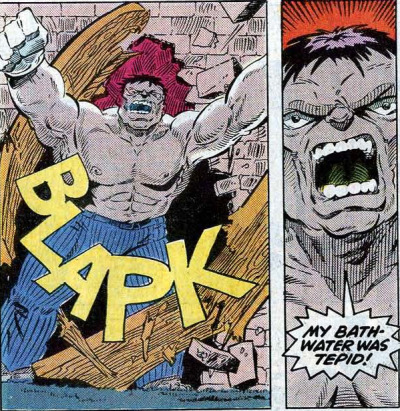