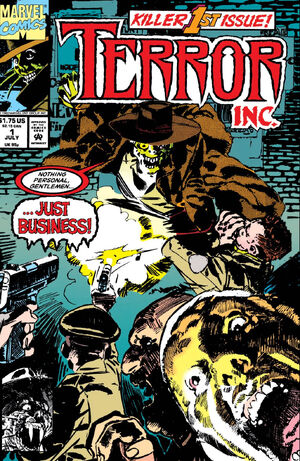 I suppose we should be grateful that a new series is launched without Spider-Man, Ghost Rider or Wolverine appearing in the first five issues.

Although we’ve seen Terror a few times before this, in these issues character cocreator D.G. Chichester really tells us what Terror’s all about.  He’s kind of a street-level, partly demonic avenger—similar to Ghost Rider in some ways, except that he’s also a mercenary.  Oh, and his power is to use dead peoples’ bodyparts.

He’s a demon-for-hire who, in his first solo outing, is hired to literally go to Hell to fight an immortal arms dealer who literally sold his soul to the Devil. He allies himself with Hellfire, who debuts here and who is Son of Satan’s half-brother.  Sadly, he’ll appear in this series but never again.  Not even when Terror gets his own MAX imprint title in the 2000s.

On the whole, I don’t think Marvel does occult stuff very well.  Sure, there are exceptions like on Dr. Strange or the first Son of Satan series. But on the whole, their view of The Devil is poorly formed (there’s at least six different “devils” as well as Mephisto and Hela), and I guess it’s also partly my bias that I’m not big on this kind of stuff.  For what it is, though, this is pretty well done.  Very interesting ahead-of-its-time art.

Also, given Terror’s power to animate dead limbs, you have to love the letter page title.