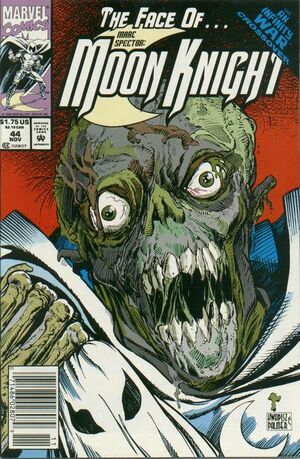 We finally get to the “Moon Knight is melting” story, which was begun before a bunch of Infinity War tie-ins–and even this issue is dogeared as tying to that series (but it does so only by recapping).  Marc Spector’s skin is dissolving, and he asks Mr. Fantastic and Dr. Strange for help.  Magic and science reveal that Marc got infected by Demogoblin, the demon who possessed Hobgoblin.

To resolve his demon-blood-melting-his -body problem, Moon Knight has to use demon Hobgoblin’s blood to cast a spell….Does anyone care about this?  It seems like even the creators don’t since at the very end the demon is vanquished and creeps out of Moon Knight’s cape… That’s so silly that it trivializes the year-long storyline that preceded this finale.

Moon Knight has become far removed from his roots as a street-level, borderline psychopath with multiple personalities and an ambiguous tie (is it real, or imagined?) to Egyptian magic.  He’s now a poorly defined and largely generic character with nothing that makes him very interesting or likeable.