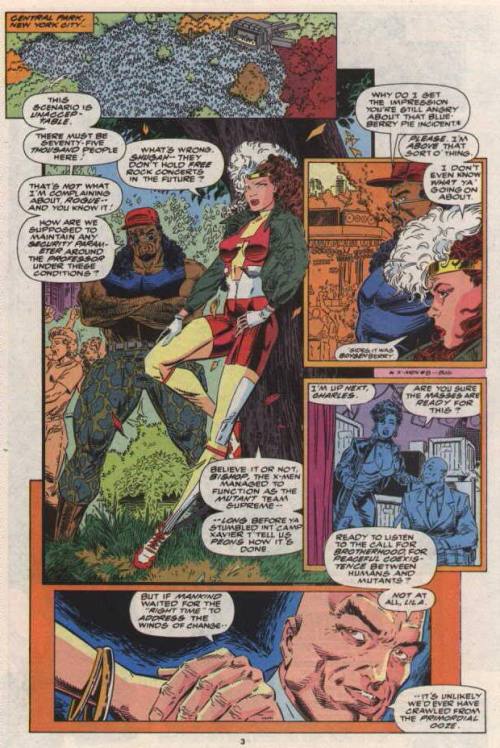 The X-Cutioner’s song is a 14-part story that crossed over between X-Men, X-Factor, X-Force and Uncanny X-Men.  It starts in Uncanny X-Men #294, where Lila Cheney holds a concert in the park in support of mutant rights and tolerance.  Stryfe shows up and poisons Professor X, who is making a speech, with a bullet infected with the technovirus.  But then Cable shows up and ALSO shoots the Professor X, while calling himself “the man who saved tomorrow.”

At the same time, Apocalypse’s new Horsemen–including the massively jacked Caliban–fight various other X-heroes, and kidnap Scott and Jean.  Only it’s not Apocalypse they’re working for–it’s Mr. Sinister, disguised as Apocalypse.  And he’s working with Stryfe. 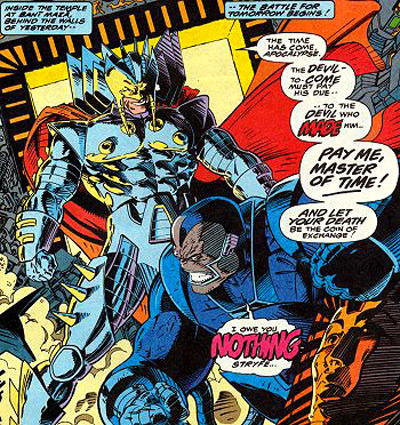 They’re not super friendly with each other.

Professor X, shot, goes to the hospital and members of X-Factor and the X-Men chase down Cable. X-Force join with them because, hey, dude shot the Professor! 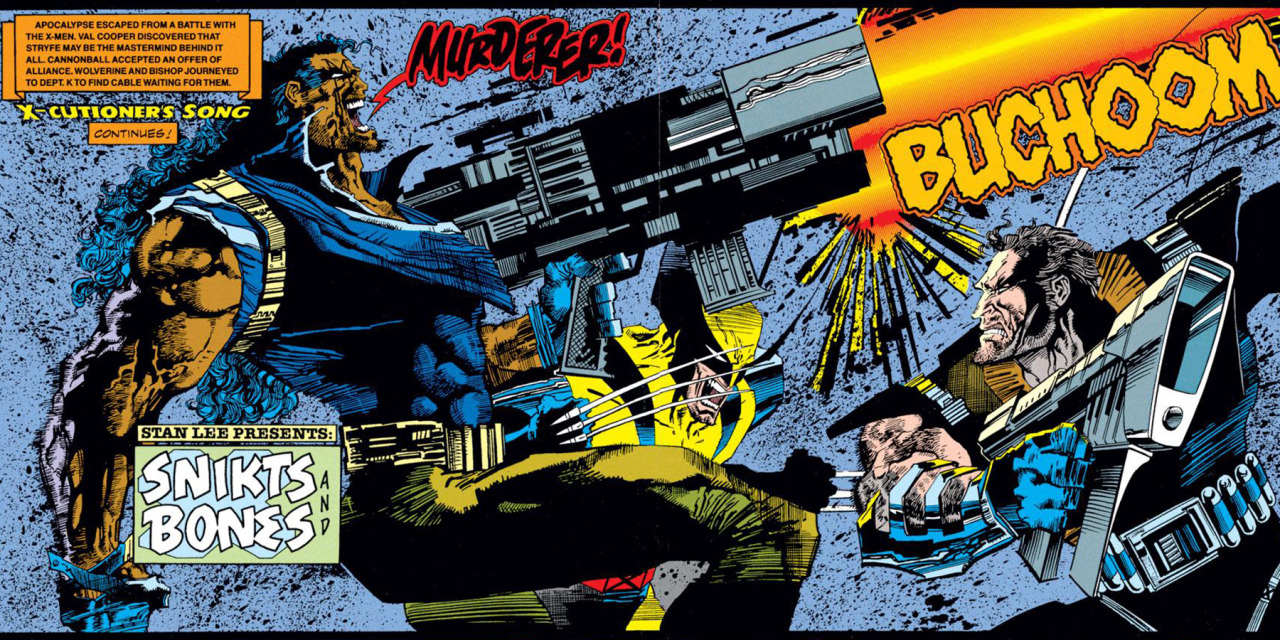 Turns out, after a fight, Wolverine and Bishop learn that Cable didn’t shoot Xavier.  It was Stryfe.  Disguised as Cable.  Shape-shifters make for a confusing story! 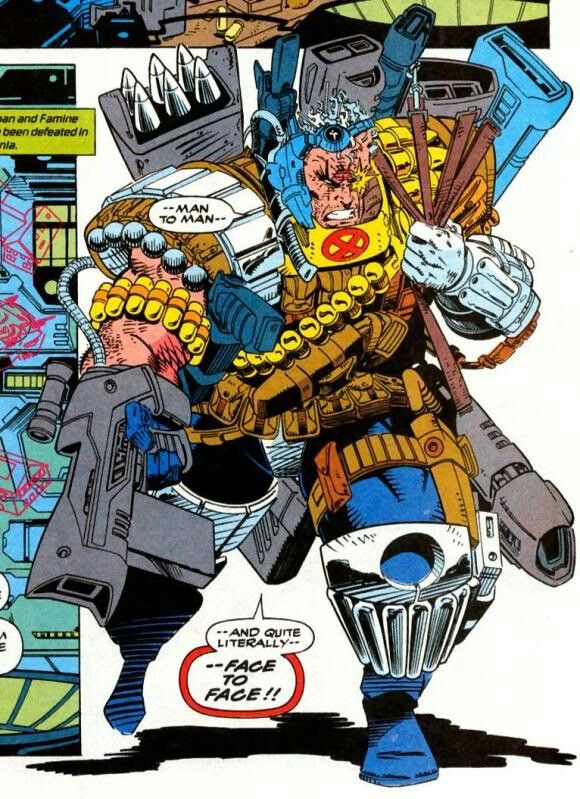 At this point, we’ve got competing storylines: One set of X-Men going after “Cable” and the Mutant Liberation Front, and another trying to rescue Scott and Jean from “Apocalypse.”  When that teams reaches him, they find a weakened Apocalypse–and he’s not thrilled that someone was masquerading as him, so he gives the X-team a cure for the virus killing Xavier. 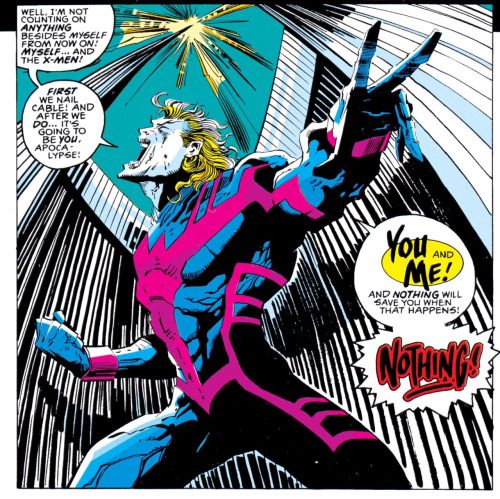 Angel is still pretty hateful towards ‘Poc, since he turned Angel into Archangel.

After a big fight during which Strobe blinds Rogue, the other team beats the MLF, finds Cable, and learns that it wasn’t really him who shot the Professor.

We learn that Stryfe’s motivation in getting everyone to hate Apocalypse was that ‘Poc abused him as a kid.  It’s kid-abuse issues.  Stryfe manages to mortally wound Apocalypse, but Apocalypse escapes into the arms of the X-Men.  His horsemen think that’s pretty weak, so they decide to team with Stryfe. 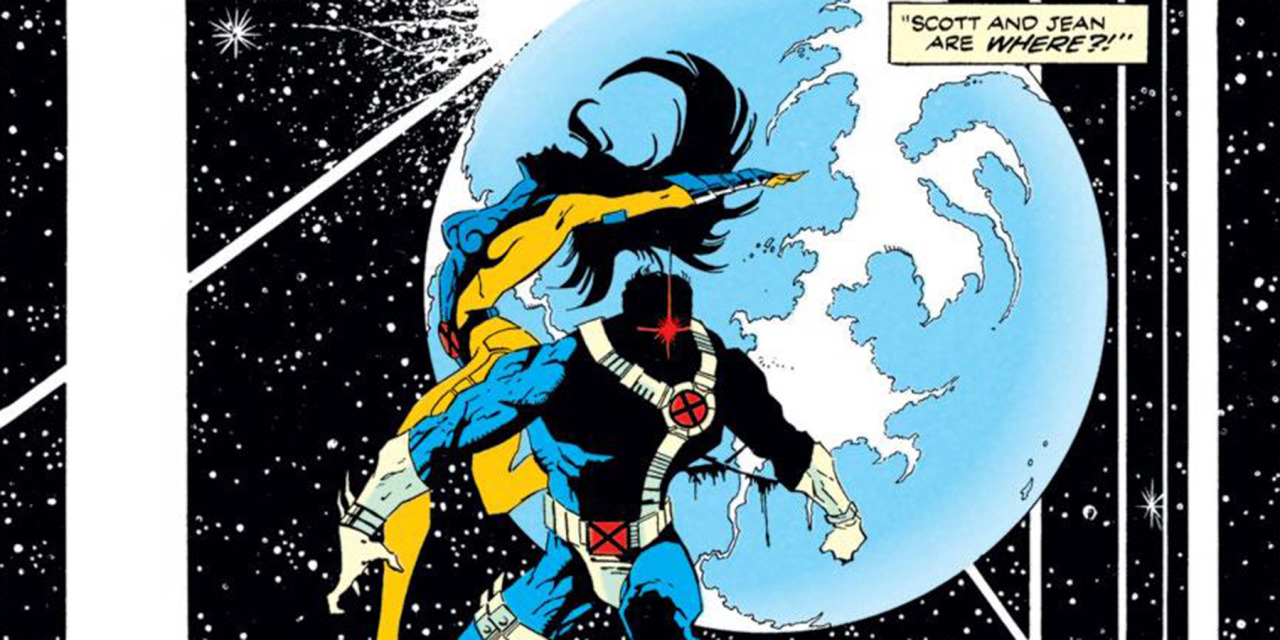 Got it?  It’s the X-Men/-Factor/-Force teams, with Apocalypse, now teamed against Stryfe and the Horsemen, who have Scott and Jean hostage.

They’re being tortured, by the way.

When all the teams come together for the big fight, Stryfe and Cable are sucked into a time vortex, and Jean figures out that one of them–either Stryfe or Cable–is actually Scott’s son Nathan.

Yes, there’s a lot more–it’s 14 comics long after all–but those are the main points.  And in the tradition of Chris Claremont, a big story wouldn’t be enough if it didn’t also plant seeds for the future–we see the first signs of the Legacy Virus in this story as well.