It’s revealed that Steele got his powers from the same scientist who gave Cage his powers, and implied that Hardcore did as well. 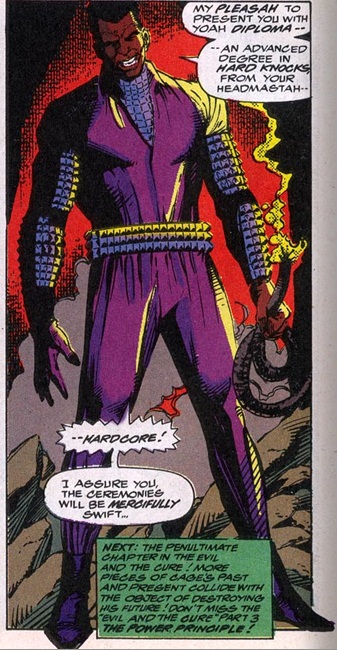 It’s fine to have new characters introduced in this book and to have them all tie to Cage’s origin, but the story also indicates that these criminal conspirators were behind the death of Iron Fist.  Not everything has to be part of a sinister plot—it starts to stretch credulity.  (I recognize that I have a limited right to disbelief given that this is a story about a guy with diamond-hard skin and super strength.)

The tests being done at the prison create incurable, fatal illness as a side effect of getting super powers, which leads to a revolt. The West Coast Avengers come to Chicago to squash the beef, particularly with the super-powered guards, and this gives Cage the chance to escape. And in a case of truly bad racial profiling, Wonder Man assumes Cage is one of the bad guys.

We end with Steele dying from the process that gave him his powers, and the truth about Iron Fist’s death coming out—which means Cage is fully cleared of all suspicion. And the very last panels show Luke Cage’s younger brother, who will later become Coldfire, fleeing the family home because he believes Cage is intent on tracking down their father and killing him.