Valkyrie comes on the scene, trying to get the female Avengers to join a new team called The Liberators.  But Medusa will only help if there’s an even exchange.

That’s consistent with Medusa’s personality–she started as a villain and became a queen.  She is not a clearly black-or-white character. 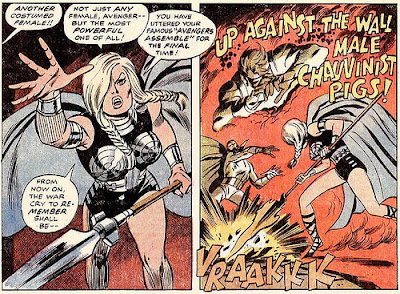 All along with some heavy-handed women’s lib stuff.  She tries to replace the Avengers’ war cry with “Up against the wall, male chauvinist pigs!”  It’s funny, albeit dated material. 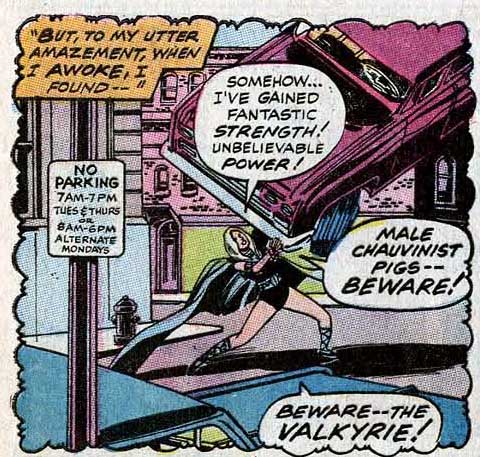 Sadly, Valkyrie’s origin is that she worked for a sexist scientist who spilled chemicals on her, and she got powers.

Val gets the female Avengers to revolt by preying on their insecurities.

So, the men and the women split up for their big trip to… 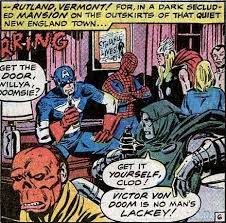 Complete with a cameo by Roy and Jeanie Thomas.  The Masters of Evil crash the parade. The men fight them, are losing, and the women come to save the day.  (And yes, that’s a guy in a costume of The Owl, a Batman-satire.  The Rutland parade was in both Marvel and DC Comics, and was often used by each publisher to do a little cross-over teasing.)

I like Valkyrie, so it’s a little annoying that her first appearance is upstaged by the Rutland Parade.  But I do love the Rutland stuff.  Wish they still did it.

And it ends with Clint still being a jerk.

Oh, also: This isn’t the first Valkyrie. It’s actually Enchantress in disguise–which is how she so easily got the women to revolt against the men. Next time we see Val, it will be a REAL origin and the REAL character.  That’s in Defenders #4, which is really the first appearance of Val–regardless of the fake new Wiki will tell you.