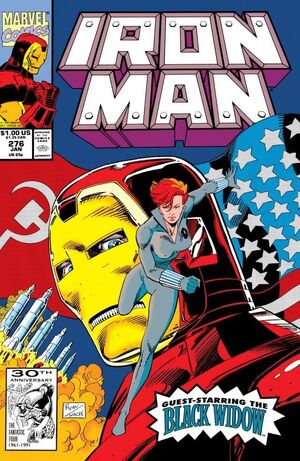 During the last arc, we got teased about the coming of Black Widow, and that happens now.  She wants Iron Man to help deal with a Soviet spy. And she rides in a pod on his back.  There’s a lot of this—of Iron man literally carrying Black Widow throughout the mission.  And of course they’re successful in foiling the dastardly plot.

Widow deserves better than this.  She’s wholly unimportant to the story. Also, on the letters page… …We are told that John Byrne is resigning, and we’re told that Len Kaminsky is a good replacement because he wrote a “well-received” Quasimoto story.

Really?  I don’t think there’s such a thing as a good Quasimoto story.