I thought I’d include a whole page from this issue, because it’s a great example of the complexity and density that Marvel packed into its early issues.  On this page, we see Foggy is still having symptoms from the traumatic brain injury he incurred in Ox’s first appearance, which Stan fails to remind us in a cute little box happened in Daredevil #6—very uncharacteristic of Lee, who was usually a huge fan of footnotes and crossreferences.  Then, we see Matt Murdock still pining for Karen Page, but his pride prevents him from wanting her too bad because he doesn’t want to be pitied.  This is a huge piece of Murdock’s personality, and one that will be his fatal flaw for literally decades to come.  Then, finally, the actual action starts with Ox breaking out of prison.  And knocking our hero unconscious, where’s he’s picked up by the cops. 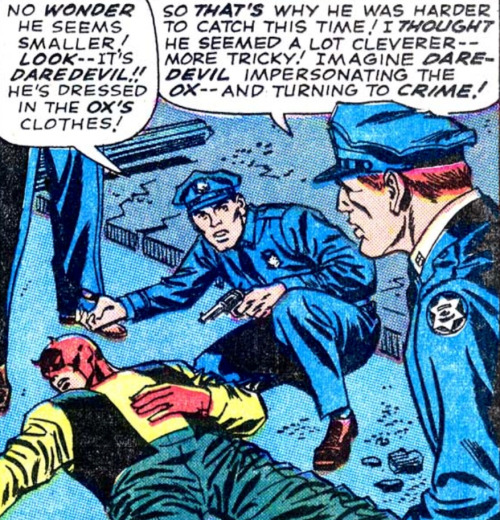 There’s also an irony here: The villain breaks out, and DD ends up in jail for the first time.

Get used to it Matt, you’ll be back.

And at least he got to keep his mask.  Also, Ox does this, and doesn’t even break one of Daredevil’s ribs… 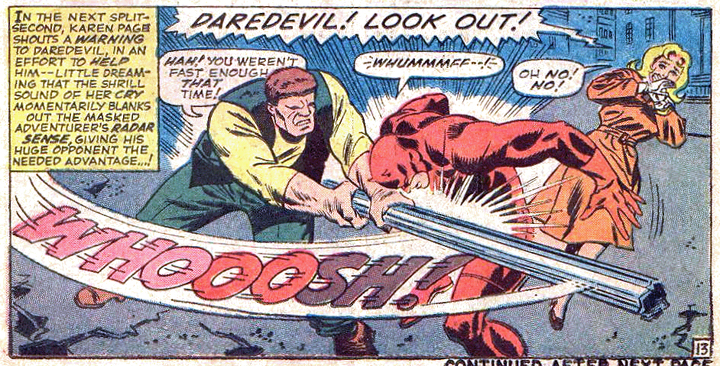 It’s not the greatest issue, but I thought the page above was an interesting piece to talk about.

For the complete history of the MU, year by year, go here