Finally!  A Punisher story with actual story, rather than just him killing the villain-of-the-month.  (Or “villain-of-the-bi-week,” since this comic is coming out 24 times a year.)

A senior advisor to Kingpin suggests they kidnap Microchip and use the threat of killing him to blackmail Punisher into killing one of Kingpin’s competitors, Howard Nees.

And it works.  Even if some of the dialogue is bizarrely stilted: That panel up top is everything wrong with early 1990s comics in one panel: Hacky dialog with inconsistent contractions, randomly torn costume without a scratch on the skin, merchandising at the toy fair, Madonna reference on the bulletin board, references to drugs by street names that went out of style a decade ago, a moral plea by a guy who shoots more often than Michael Jordan, and a headband.

Anyway, back to Kingpin blackmailing Punisher:  Before you say, “Why would Punisher ever do what Kingpin wanted him to do?” remember that Punisher loves killing bad guys, and Howard Nees deserves death as much as any other.

Oh, and Punisher has a dog named Max who he gets all gooey with.  But later in this same story he kills his own dog, after the dog is mortally wounded defending Punisher’s hideout.  So sad!

But he came back for the TV show. 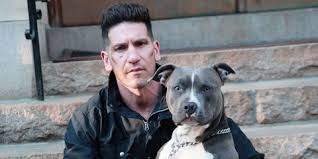 Anyway, in the process of killing Nees, Punisher gets caught by the cops and sent to prison.  I’m a complete sucker for prison tales.  I saw Sugar Hill three times and watch the entire Oz show at least once every three years. Obviously, Punisher loves prison because everyone there is someone he wants to punch in the face.  And speaking of faces…. Jigsaw’s in the same prison.  Nice coincidence!  And he runs an army of inmates who overpower Punisher and cut his face to pieces. 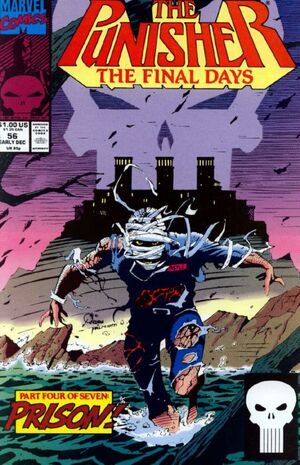 Pun gets sent to the infirmary, and escapes prison.

Now this is where the story gets very weird. 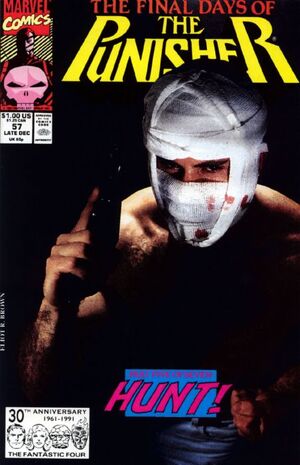 And not just because there’s a random photo cover.

Once he’s out of prison, Punisher needs medical help to deal with the pain and so he goes to an underground doctor who performs an experimental procedure on him… And that’s how this story ends.

Yeah, it’s stupid, but I love it.  This is an awesome Punisher story.

There, I said it.