This was another “old order changeth/new order cometh” issue, in which the team was joined by Moondragon (the bald chick from outer space), Yellowjacket, and The Beast–two scientists!  The public’s reaction ain’t universally great… 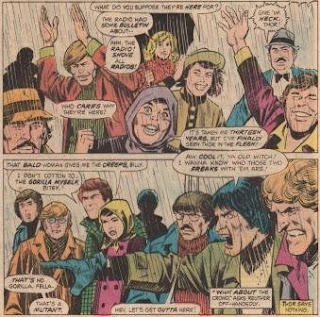 These kinds of issues could be formulaic, but they were always fun.  We would get to see new interactions between characters, and there were always a few people who would reject membership.  Lots of great stuff in this issue: Hawkeye storms off in a huff after saying there lots of other groups around and “we’re not the only game in town;” Thor, Iron Man and Cap are identified as “part timers;” and, I think, it’s the first time Beast says “Hiya, kids!  Hiya! Hiya!” The new team fights The Stranger in the last few panels, and the battle is continued into #138. Nobody likes The Stranger anyway.  Right?  It’s also the return of Toad, who is on Stranger’s spaceship.

Beast is a wiseass, which is reason enough to post this panel.  It was really Steve Englehart who laid the foundation for a distinct voice for the Beast character, who before his run with The Avengers was basically the lamest X-Man.  Beast also brought a much-needed sense of humor to The Avengers. He quickly became my favorite member, and then later when Wonder Man joined the team and they became best friends it all got even better.

And I love how George Tuska draws The Toad here–he has to be consciously referencing Rumpelstiltskin, doesn’t he?

P.S.: The title of this issue was the vaguely homoerotic “Stranger In A Strange Man.”

It’s a jam-packed two issues, and we also get to see Vision naked for the first time, as he and Wanda take a beach vacation together.