If you would have told me there was a year when Thor was the best Marvel comic on the stands, I would have scoffed.  And while it probably isn’t the “best,” it’s certainly up there.  Around this time, the Lee-Ditko fights about Spider-Man were showing in the pages of the book, The Avengers was borderline awful, and Stan Lee was simply writing too damn much so there was no quality control.

But these Thor issues are great.  It starts with him going to Pittsburgh(!) to fix his broken hammer.  Because nothing beats American steel.

He then returns to New York City to meet the new lineup of The Avengers and, like most Marvel readers, he’s dumbfounded to see how lame it is. Look how Quicksilver says that the only “original” Avenger left is Captain America.  Uh, no dude.  Learn your history.  Cap didn’t arrive until after Wasp named the team and they’d already fought Loki and a couple other, less-memorable villains.

But the real reason I love these issues: Absorbing Man!  He’s one of my favorite villains, and he’s back for basically a three-issue battle, starting with transforming his wrecking ball into a disco ball of brick…

Two big surprises during the battle.  First, we learn that Thor has time-travel power… I don’t think this was ever used again, so perhaps it’s not canon.  But, even more important, Crusher Creel lifts Thor’s hammer!

In the end, Loki is banished from Asgard, and Jack Kirby shows some of his creativity using negative photo backgrounds. 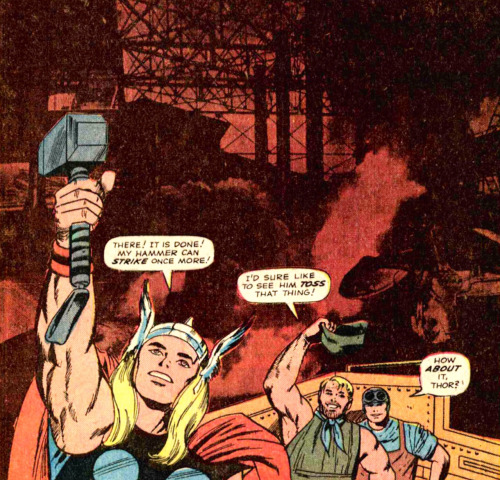