If I haven’t said this before, I’ll say it now: The best part of Gerry Conway’s run was George Perez signing on for semiregular art duties.  Perez was one of the greatest comic artists of the 1970s-1980s, both in terms of consistent quality and influence.  Also, he drew a TON of comics. 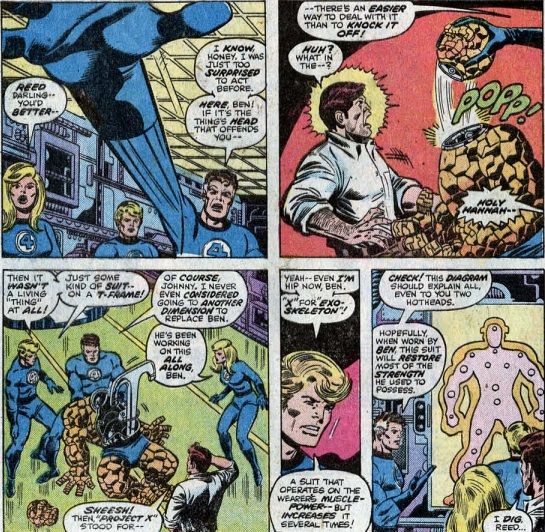 Storywise, something I forgot to mention last post was that Thing hung out with Hulk so much that Hulk’s high Gamma Ray content “cured” Ben Grimm.  Yes, that is indeed ridiculously stupid.  That’s why I didn’t mention it when I was paying tribute to two otherwise pretty good Gerry Conway issues.

Sometimes, slogging through the FF one panel at a time is a forced march.  I can’t wait until John Byrne comes on board and the series gets great again.  And speaking of Byrne…

He’ll rename Susan Storm as Invisible Woman, but Luke Cage foresaw the need over 10 years earlier.  Oddly enough, Cage himself–by 1976–probably should have outgrown the moniker “Power Man,” which was a reference to the black power movement that hit its heights in the late 1960s.

Anyway, the team has to hire a strong-man replacement, and when you need to hire a hero, you can’t go wrong with Luke Cage.  I think people forget that before Spider-Man, others had been both an Avenger and an F4.  Actually, She Hulk was, too.

By the end of #170, Luke is off the team and Grimm now has a “Thing costume,” complete with powers, so he’s back as the fourth member.

My copies of these issues did not preserve well (and I’m missing #169), so I’m not bothering to scan panels from them.  Sorry.

Trust me, you ain’t missing anything.  And next issue gets even worse.  Let’s all just pray Conway’s run doesn’t last much longer.