From the depths of an otherwise mediocre comic comes…A really, really good issue. It starts with Scorpion crawling out of the New York City sewer system, after his defeat at the hands of Ms. Marvel in the second issue of her comic, and ranting out loud an overview of his origin.  He’s still mad at J. Jonah Jameson for turning him into Scorpion, still stuck in his suit.

We then get some parallels: Mary Jane is mad at Peter because of his being absent during Aunt May’s last hospitalization, during which he was busy on Spider-Man duties.  They are barely talking now, and Peter is resentful at his costumed identity because of it.

Then we move to Hector Acala, who the world now knows is White Tiger.  He can’t walk down the street with his girlfriend because he gets mobbed by fans.

So we’ve got three characters, all frustrated by their super identities.

I would have liked to have seen this parallelism go further, but soon it’s time for a big Spidey-versus-Scorpion battle.  And in the end, we get a major turn for the Scorpion character… He can take off his costume.  He just never tried.

This is a pretty dopey way to take this burden off the character–we’ve actually seen him try to pry his own mask off his face.  So it’s a major retcon.  But it does move him away from this “I hate myself and I’m stuck in a costume/identity” trope, which is a part of so many Marvel characters. 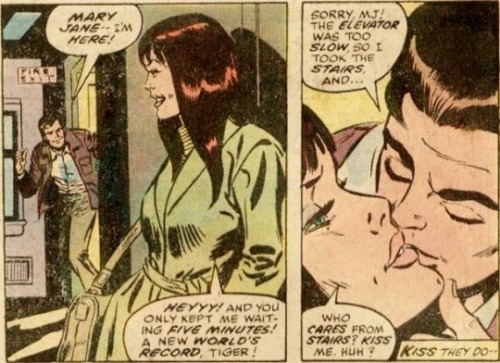 In all, a very nice job.

Creators: Bill Mantlo and Jim Mooney
Grade: B
For the complete history of the MU, year by year, go here.